How archaeologists are using deep learning to dig deeper 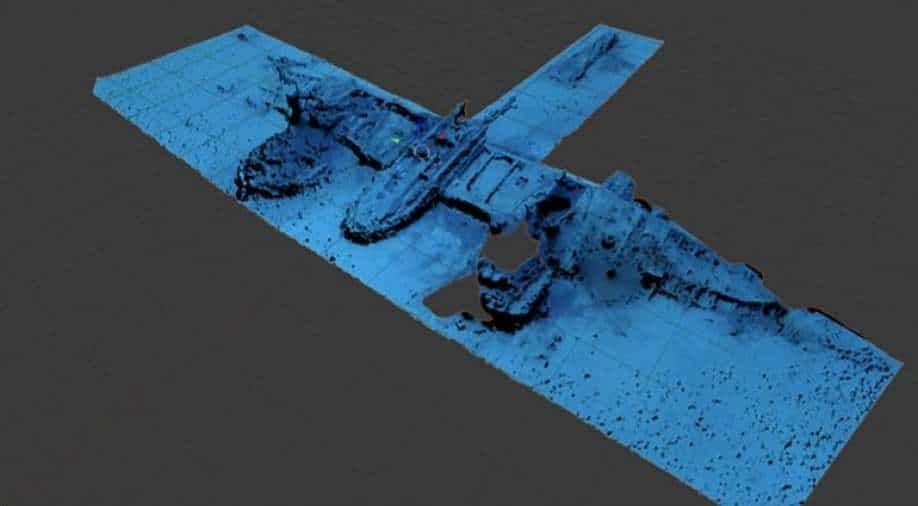 **EMBARGO: No electronic distribution, Web posting or street sales before 3:01 a.m. ET Tuesday, Nov. 24, 2020. No exceptions for any reasons. EMBARGO set by source.** In an undated photo from Harvey Mudd College, a 3-D reconstruction of a World War II plane wreckage off the coast of Malta. The reconstruction was built using sensor data obtained from an autonomous underwater vehicle, which was programmed to collect the “best” images for making such reconstructions. (Harvey Mudd College ©️ 2020 The New York Times) Photograph:( The New York Times )

Finding the tomb of an ancient king full of golden artifacts, weapons and elaborate clothing seems like any archaeologist’s fantasy. But searching for them, Gino Caspari can tell you, is incredibly tedious.

Caspari, a research archaeologist with the Swiss National Science Foundation, studies the ancient Scythians, a nomadic culture whose horse-riding warriors terrorized the plains of Asia 3,000 years ago. The tombs of Scythian royalty contained much of the fabulous wealth they had looted from their neighbors. From the moment the bodies were interred, these tombs were popular targets for robbers; Caspari estimates that more than 90% of them have been destroyed.

He suspects that thousands of tombs are spread across the Eurasian steppes, which extend for millions of square miles. He had spent hours mapping burials using Google Earth images of territory in what is now Russia, Mongolia and Western China’s Xinjiang province. “It’s essentially a stupid task,” Caspari said. “And that’s not what a well-educated scholar should be doing.”

As it turned out, a neighbor of Caspari’s in the International House, in the Morningside Heights neighborhood of Manhattan, had a solution. The neighbor, Pablo Crespo, at the time a graduate student in economics at City University of New York who was working with artificial intelligence to estimate volatility in commodity prices, told Caspari that what he needed was a convolutional neural network to search his satellite images for him. The two bonded over a shared academic philosophy, of making their work openly available for the benefit of the greater scholarly community, and a love of heavy metal music. Over beers in the International House bar, they began a collaboration that put them at the forefront of a new type of archaeological analysis.

A convolutional neural network, or CNN, is a type of artificial intelligence that is designed to analyze information that can be processed as a grid; it is especially well suited to analyzing photographs and other images. The network sees an image as a grid of pixels. The CNN that Crespo designed starts by giving each pixel a rating based on how red it is, then another for green and for blue. After rating each pixel according to a variety of additional parameters, the network begins to analyze small groups of pixels, then successively larger ones, looking for matches or near-matches to the data it has been trained to spot.

Working in their spare time, the two researchers ran 1,212 satellite images through the network for months, asking it to look for circular stone tombs and to overlook other circular, tomblike things such as piles of construction debris and irrigation ponds.

At first they worked with images that spanned roughly 2,000 square miles. They used three-quarters of the imagery to train the network to understand what a Scythian tomb looks like, correcting the system when it missed a known tomb or highlighted a nonexistent one. They used the rest of the imagery to test the system. The network correctly identified known tombs 98% of the time.

Creating the network was simple, Crespo said. He wrote it in less than a month using the programming language Python and at no cost, not including the price of the beers. Caspari hopes that their creation will give archaeologists a way to find new tombs and to identify important sites so that they can be protected from looters.

Other convolutional neural networks are beginning to automate a variety of repetitive tasks that are usually foisted on to graduate students. And they are opening new windows on to the past. Some of the jobs that these networks are inheriting include classifying pottery fragments, locating shipwrecks in sonar images and finding human bones that are for sale, illegally, on the internet.

“Netflix is using this kind of technique to show you recommendations,” Crespo, now a senior data scientist for Etsy, said. “Why shouldn’t we use it for something like saving human history?”

Gabriele Gattiglia and Francesca Anichini, both archaeologists at the University of Pisa in Italy, excavate Roman Empire-era sites, which entails analyzing thousands of broken bits of pottery. In Roman culture nearly every type of container, including cooking vessels and the amphoras used for shipping goods around the Mediterranean, was made of clay, so pottery analysis is essential for understanding Roman life.

The task involves comparing pottery sherds to pictures in printed catalogs. Gattiglia and Anichini estimate that only 20% of their time is spent excavating sites; the rest is spent analyzing pottery, a job for which they are not paid. “We started dreaming about some magic tool to recognize pottery on an excavation,” Gattiglia said.

That dream became the ArchAIDE project, a digital tool that will allow archaeologists to photograph a piece of pottery in the field and have it identified by convolutional neural networks. The project, which received financing from the European Union’s Horizon 2020 research and innovation program, now involves researchers from across Europe, as well as a team of computer scientists from Tel Aviv University in Israel who designed the CNNs.

The project involved digitizing many of the paper catalogs and using them to train a neural network to recognize different types of pottery vessels. A second network was trained to recognize the profiles of pottery sherds. So far, ArchAIDE can identify only a few specific pottery types, but as more researchers add their collections to the database the number of types is expected to grow.

“I dream of a catalog of all types of ceramics,” Anichini said. “I don’t know if it is possible to complete in this lifetime.”

Shawn Graham, a professor of digital humanities at Carleton University in Ottawa, uses a convolutional neural network called Inception 3.0, designed by Google, to search the internet for images related to the buying and selling of human bones. The United States and many other countries have laws requiring that human bones held in museum collections be returned to their descendants. But there are also bones being held by people who have skirted these laws. Graham said he had even seen online videos of people digging up graves to feed this market.

“These folks who are being bought and sold never consented to this,” Graham said. “This does continued violence to the communities from which these ancestors have been removed. As archaeologists, we should be trying to stop this.”

He made some alterations to Inception 3.0 so that it could recognize photographs of human bones. The system had already been trained to recognize objects in millions of photographs, but none of those objects were bones; he has since trained his version on more than 80,000 images of human bones. He is now working with a group called Countering Crime Online, which is using neural networks to track down images related to the illegal ivory trade and sex trafficking.

Crespo and Caspari said that the social sciences and humanities could benefit by incorporating the tools of information technology into their work. Their convolutional neural network was easy to use and freely available for anyone to modify to suit their own research needs. In the end, they said, scientific advances come down to two things.

“Innovation really happens at the intersections of established fields,” Caspari said. Crespo added: “Have a beer with your neighbor every once in a while.”