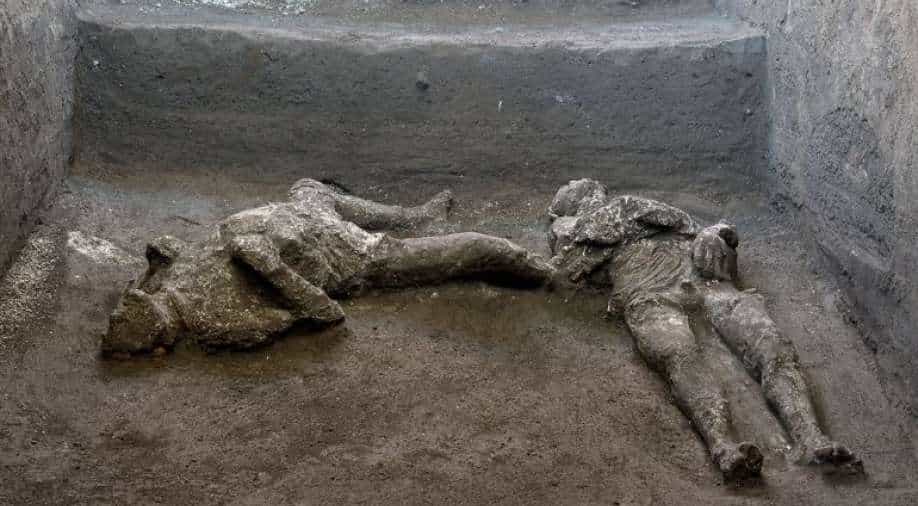 Skeletal remains of a rich man and his male slave from nearly 2,000 years ago were discovered in an archaeological park in Pompeii, Italy.

The officials at the archaeological park in Italy confirmed the discovery on Sunday. Parts of skulls and bones were found during an excavation of the ruins of an ancient and elegant villa that held a panoramic view of the Mediterranean Sea on the outskirts of a Roman city, which disappeared during the period of 79 AD.

This area is the same one where remains of three harnessed horses were found in 2017.

It is being believed the first skeleton is of a rich man and the second one is of his 'male slave', both of whom were trying to run to safety after the Mount Vesuvius erupted. The two were, assumably, saved from the eruption. However, they got engulfed by a powerful volcanic blast that took place the next morning. This morning blast, as per the experts, "apparently invaded the area from many points, surrounding and burying the victims in ash."

The skeletons were discovered in a lying position. The two were lying next to each other on their backs and were covered in a layer of grey ash which was reportedly at least 2 metres deep.

"The victims were probably looking for shelter in the cryptoporticus, in this underground space, where they thought they were better protected," explained Massimo Osanna, the director-general of the archaeological park run by the jurisdiction of the Italian Culture Ministry.

The Mount Vesuvius is still an active volcano.