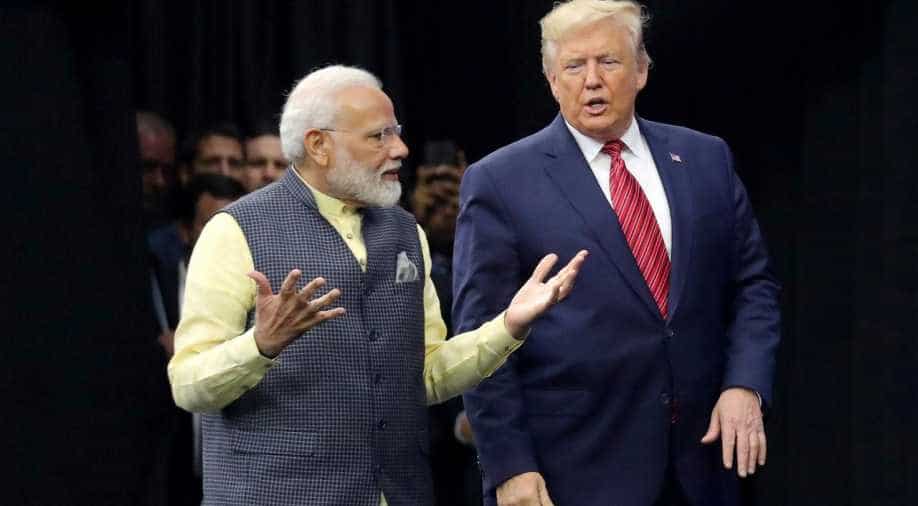 While the rest of the world is grappling COVID-19, China is very strategically preparing itself for a post-COVID-19 world. Its economy is capitalistic and centrally directed. Additionally, military capabilities are being built and alliances are being developed so that Xi Jinping can flex muscle as a global superpower after the crisis. The truth is that China will remain significantly influential in Asia and Africa after the coronavirus pandemic. For this reason, India is the strongest candidate in the region that can stand up to China. This is because India has a viable geographical location, a strong, young workforce and large economy. And it is President Trump who can help India stand up to and get ahead of China.

For the past few decades, China has slowly and steadily expanded influence in South Asia. At present, China is very visibly stepping in and assisting weaker nations fight coronavirus. The intention is to control them in the future. Unlike President Trump who has been quite verbose in blaming China, PM Modi has chosen to not openly call China out for the pandemic. Instead, India has strategically changed policy and provisions. For instance, foreign direct investment (FDI) rules were changed in April. The new rules required any ‘border-sharing country’ to get the Government of India’s official approval to invest in India. China was displeased and belligerently called the rules discriminatory.

Moreover, a significant number of Indian intellectuals want Taiwan to be an active part of World Health Organization meetings. This will successfully check back China’s dominance exerted on the WHO. Since India will be leading the executive board of WHO’s next meeting, there is a strong consensus that PM Modi should agree to Taiwan acting as an observer. Furthermore, India has respected a ‘One China Policy’ for decades. Now, Indian policy experts are aggressively asserting that China should recognize a ‘One India Policy’ as well. Specifically, this will require China to give up its claims on Indian territory.

For quite some time now, America has called upon India to step up and play a more dominant role in the Indo-Pacific region. The timing could not be better. The Modi-Trump ‘bromance’ is going stronger than ever. With a preferred defence partnership and strong trade ties, US-China relations could never be better. Moreover, the American government has publicly stated that the USA needs to reduce dependence on China. One way to do this is reforming American global supply chains. This process has already begun.

American multinational corporations and companies are also moving out of China. Thanks to President Trump’s encouragement, a plethora of these firms are relocating to India. The recent Atmanirbhar Bharat Abhiyan economic stimulus package is very strategic because it attracts FDI to India in several ways. MSME’s are getting strong, significant support. Beneficial labour market reforms are getting implemented. Manufacturing is being boosted and tax exemptions for setting up companies will result in new enterprises in labour-intensive sectors like food processing and textiles. The impact? This economic stimulus package provides greater ease of doing business, much-needed labour reforms and some serious tax incentives for Indian and foreign companies.

With the USA being one of India’s largest foreign direct investors, this economic stimulus package makes India economically attractive. With President Trump in office, there is no doubt that substantial American foreign investment will come to India. In fact, the United States of America will indubitably become India’s preferred investor. Among others, another nation that will invest in India is Japan who is reportedly at present incentivizing its firms to leave China. With this steady foreign direct investment flow, India can diversify imports and break free from Chinese dependence. Taking advantage of presently solid defence ties with the USA, India can overcome Chinese bullying for good.

For India, President Trump is indisputably the preferred candidate to win the upcoming American presidential election. Democratic candidate Joe Biden will do very little for India. His personal ties and lenient policies towards China that have come out on public record will only weaken India-USA relations over the next few years. To add, if Biden is elected, China will be able to continue its nationalistic agenda. This agenda may include bioterrorism. The world has seen the terrifying impact with the coronavirus pandemic bringing down even the strongest and most capable nations.

Over 100 countries have signed a resolution which seeks an investigation to learn the origin of the coronavirus disease. If China is to blame, there will certainly be severe consequences for Xi Jinping. India needs to take advantage of this momentum. Present circumstances and sentiment offer an invaluable opportunity for India to become the unquestionable leader of the region and exert influence over China. For this to happen, there is no better time for PM Modi to play the ‘Trump’ card.