The man-made disaster in Chennai 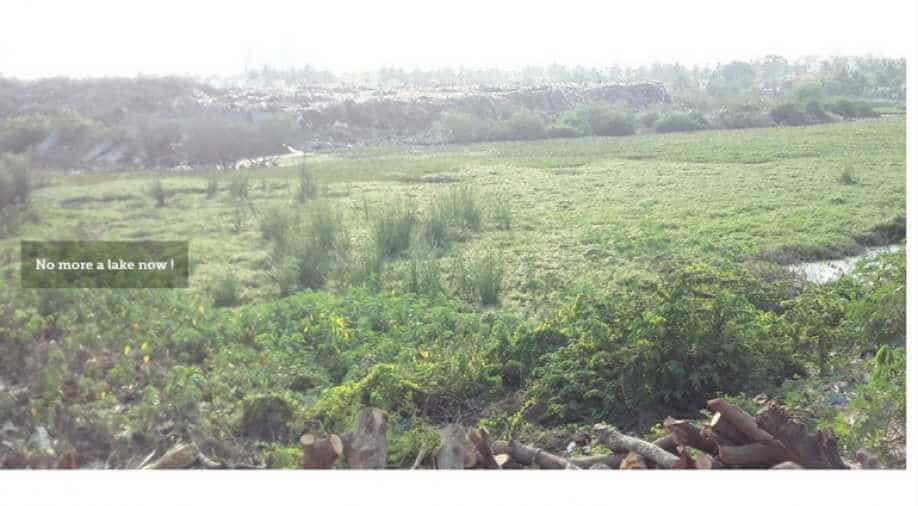 Pallavaram Lake which once spread over 200 acres is now left with just 50 acres. Photograph:( Agencies )

Chennai has been experiencing heavy rain since the past one week. Chief minister K Palaniswami has stated that the city recorded a rainfall of 56.6 cm in five days. The rain in the city has disrupted the normal lives of the people. Many of them living in the low lying areas have shifted to safer places, fearing 2015 like flood situation.

The schools in the city are closed, several university exams have been postponed, people are facing regular power cuts, waterlogging and traffic jams. The continuous downpour in the city is the result of low pressure developed over Southwest Bay of Bengal between the Sri Lankan and the Tamil Nadu coast and the cyclonic circulation rising up to 3.1 km above mean sea level.

The Tamil Nadu government has been constantly assuring that they are taking up required measures to drain the water out of the city. The chief minister claimed that the current government has handled the situation better than Bengaluru and Mumbai.

SP Velumani, minister of municipal administration and rural development said that the state government has done more work than several developed nations to deal with the rains.

The man-made disaster is the result of the diminishing water bodies in the city.

D Jayakumar, minister of finance and fishing, went a step further and claimed to have solved 98 per cent of rain-related issues in the city. However, the undeniable fact remains that it is only because of the years of improper planning that has worsened the ecological balance of the city.

Chennai suffered from severe water shortage in 2016-17. The city was hard hit by the 60 per cent deficit in the northeastern monsoon. The city has already experienced one of the most devastating floods in 2015. Such natural disaster continues to hit Chennai almost every year.

The man-made disaster is the result of the diminishing water bodies in the city. Chennai once had around 650 lakes and rivers which were a source of their freshwater. Besides this, they were also responsible for recharging the groundwater level thus preventing drought. During heavy rainfall, these rivers regulated the flow of water to human settlements by draining the excess water.

However, with the rapid growth of urbanisation and industrialisation, most of these water bodies have lost their existence. Ever increasing population in the city has led to the increasing demands for housing societies, institutions, and industries. Most of this construction has taken place over these water bodies. Also, the direct discharge of industrial and municipal waste has worsened the remaining waterways.

Konnur Lake once occupied over 250 acres of land. Due to the residential and industrial construction, it has now been reduced to 20 acres. Over 4000 houses have been built over it and it also supports the Sidco Industries. While the remaining 20 acres has also been allotted for institutional construction. Sidco Nagar was one of the worst affected areas during the 2015 floods. The construction over the lake restricted the free flow of water into the lake which had a devastating effect over the nearby slum dwellers.

The urban planning authorities do not take into consideration the ecological balance of the city while devising any architectural plan. This way they affect the natural penetration process which further leads to floods during heavy rainfall while drought in case of less rainfall. Besides this, the lakes and rivers which are not considered fit for drinking or irrigation are declared as wasteland permitting construction over it. This further disrupts the ecological balance of the city.

Pallavaram Lake which once spread over 200 acres is now left with just 50 acres. The lake was bifurcated after the construction of Thoraipakkam road for connecting Chennai Airport and Rajiv Gandhi Salai. One side of the lake still remains, however, the other side has choked to death due to encroachment and dumping of effluents from the nearby leather factory, industries, and sewage waste. This part of the lake has become a dump yard due to the consistent dumping of garbage for the past few decades. This dumping has contaminated the groundwater of that area.

Residents around the Pallavaram Lake had filed a petition in the HC for removing the illegal encroachment over the water body. According to them the settlements over the water have come up in connivance with the Pallavaram municipality. Besides letting the growth of encroachment in the lake the municipality itself planned to construct a methanation plant on the land.

An activist working for the restoration of water bodies in Chennai states "it is only because of the municipal that the illegal settlements have survived well. had they not provided the basic amenities the temporary shanties would not have turned into permanent residents”.

One of the major causes for diminishing waterways in Chennai is that a lot of construction is being done on it.

The illegal encroachment over the water bodies is not restricted to this lake. In fact, one of the major causes for diminishing waterways in Chennai is that a lot of construction is being done on it. No government official is ready to take the responsibility of the ever-growing illegal encroachment.

The depleting water bodies because of the encroachment over them is severely affecting the ecology of the city. The consequent result of this is that Chennai faces drought during less rainfall whereas waterlogging and floods during heavy rains.