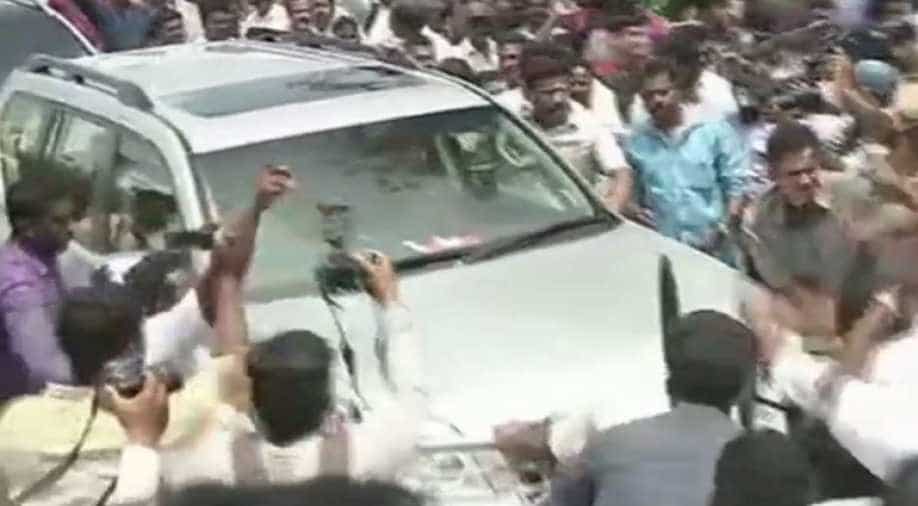 Sasikala arrives at Gleneagles Global Health City to visit her husband amid a crowd of cheering supporters. Photograph:( ANI )

Sasikala had sought 15-day parole, but was granted only five days with tough conditions

Sidelined AIADMK leader V K Sasikala, out of jail on a five-day parole, today visited her husband M Natarajan who is recovering at a hospital here after undergoing a liver and kidney transplant.

Sasikala, who was removed from the AIADMK last month after the factions led by Chief Minister K Palaniswami and now Deputy Chief Minister O Panneerselvam united, met Natarajan and was with him for about two hours in the hospital, sources said.

Later, she returned to her niece Krishnapriya's residence in the city.

The beleaguered AIADMK leader's car briefly halted in front of a Ganesha temple in Kotturpuram and she prayed from inside the vehicle as used to be done by late AIADMK leader J Jayalalithaa.

Sasikala's low profile visit to hospital was in stark contrast to her public appearances prior to her incarceration in February.

During her days before being imprisoned, she used to be surrounded by party men and loyalists raising slogans praising her as "Chinnamma".

Sasikala has been lodged in the Parapana Agrahara central jail since February this year after the Supreme Court upheld her conviction by a special court in a disproportionate assets case. Her relatives Ilavarasi and V N Sudhakaran are also serving four-year jail terms in the case.

Facing tough parole conditions, she refrained from visiting party men or interacting with them during her hospital visit today.

The hospital, meanwhile, said in a statement that Natarajan (74) is recovering and he is "awake and oriented and is on ventilator support through tracheostomy, which was performed on October 6".

TTV Dhinakaran loyalist and senior leader Nanjil Sampath said he saw Sasikala in the hospital and told her to pray.

He said he asked Sasikala to recite 'Sundara Kandam' from the Ramayana "as it would bring her relief".

Sasikala arrived in the city yesterday from the Parapana Agrahara central jail in Bengaluru after being granted parole for five days.

Natarajan was admitted at the liver Intensive Care Unit of Gleneagles Global Health City under the care of a team of doctors led by Professor Mohamed Rela, the hospital said.

It said that at the time of admission, he had "worsening liver failure, kidney failure and lung congestion, and underwent liver and kidney transplantation on October four."

In a statement, Director, Institute of Liver Disease and Transplantation of the hospital, Dr K Ilankumaran said considering Natarajan's age and his associated co-morbidities, his condition was stable during the surgery and he is "recovering well in the liver intensive care unit".

"He (Natarajan) is awake and oriented and he is on ventilator support through tracheostomy, which has been performed on October six."

As in any other combined liver and kidney transplant surgeries, his condition would be critical for the next few days, Ilankumaran said, adding "he is under close observation and monitoring".

It may be recalled that Sasikala had sought parole for 15 days, but was granted only five days with tough conditions, including that she will not get involved in any political or other public activity or take part in party activities.

She is allowed only to visit the hospital where her husband is admitted and stay at the residence as mentioned in the application.

Sasikala has also been restricted from interacting with any media -- print or electronic.