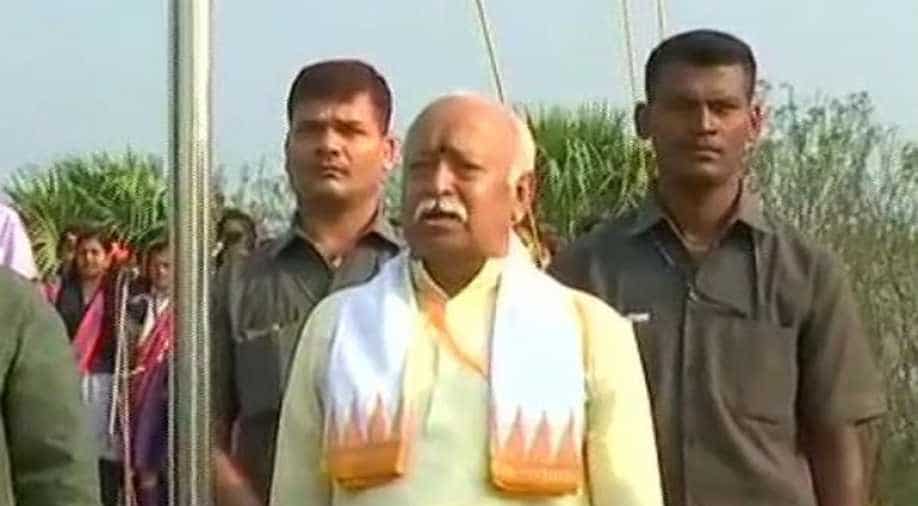 The Kerala government passed an order on January 17 saying only the heads of institutions are to hoist the Indian flag on Republic Day. Photograph:( ANI )

RSS chief Mohan Bhagwat hoisted the Indian flag this morning at a school in Kerala's Palakkad. Which really should not make the news but Bhagwat and the Kerala government have had a long-running feud over the hosting of the tricolour.

Bhagwat had defied a government order last year by hoisting the flag at a government-aided school in Kerala, again in Palakkad.

This year, the Kerala government had on January 17 said only the heads of institutions were to hoist the flag on Republic Day. But Bhagwat got around the directive with the RSS saying the school he hoisted the flag at this time around was not government-aided but run by the Sangh.

"This is not a government or aided school. The school management will decide who has to hoist the flag," RSS state coordinator KK Balram told PTI. "The government circular is not binding on us as it is a private school."

Ours is a CBSE affiliated school & not state supported. Nowhere it is prohibited,any citizen can hoist the National Flag : Devan Gopal, Principal of School where RSS Chief Mohan Bhagwat unfurled the tricolour. #Kerala pic.twitter.com/eUsbBn65ku

At the ceremony though, Bhagwat said the sort of things that usually find him in the news.

A symbol of the Hindu religion -- the colour saffron -- he said, appeared on the top of the flag.

The wheel at the centre, he said, was again a symbol of the Hindu religion.

And, he added, religion is the very foundation of life

A more common interpretation -- of the kind most Indian children learn in school -- of the three colours of the India flag goes something like this: the top saffron band symbolises the country's strength and courage, the middle white band symbolises peace and truth. And the bottom green band symbolises India's fertility, and auspiciousness.