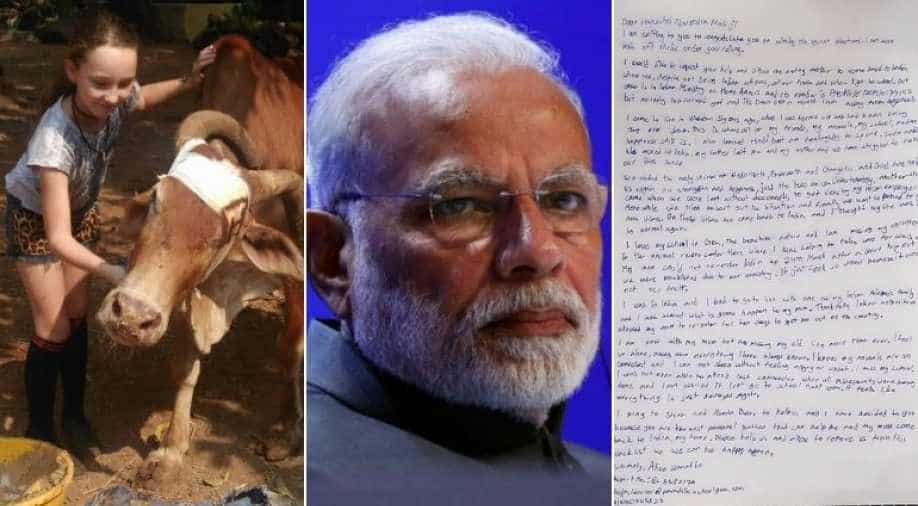 Alicja Wanatko, in her handwritten letter to Modi and Jaishankar, spoke about her fond memories of her Goa stay and her love for Lord Shiva and the Nanda Devi mountain.

An 11-year-old Polish girl has written a letter to Prime Minister Narendra Modi and newly-appointed External Affairs Minister S Jaishankar seeking the return of her family to India.

Alicja Wanatko, in her handwritten letter to Modi and Jaishankar, spoke about her fond memories of her Goa stay and her love for Lord Shiva and the Nanda Devi mountain.

"I love my school in Goa, the beautiful nature and I am missing my volunteering in the animal rescue centre there where I was helping to take care of cows. My mum could not re-enter India on 24th March 2019 after a short trip out and we were told we were blacklisted due to our overstay," Alicja said in her letter, which was tweeted to Modi and Jaishankar by her mother Marta Kotlarska.

In April her mother, Marta Kotlarska, had also pleaded to former foreign minister Sushma Swaraj. She had claimed that she was blacklisted by the Foreigner Regional Registration Office (FRRO) in Chamoli in Uttarakhand for overstaying "due to a misunderstanding".

The letter has been posted by her mother on Twitter.

the letter my daughther who is out of school due to lack of action from MHA officers has written to Honoreable Prime Minister of India for help in our case @narendramodi pic.twitter.com/PVIolpD9Ez

She also claims that she had paid the requisite fines prescribed by law.

According to reports, Marta and her daughter had arrived in Goa from Warsaw in September 2018. She is an artist and photographer by profession and had come to India to capture Goan culture.

She had left for Sri Lanka a few days earlier from Goa because she was about to exceed her 180-day limit of stay in India and visa renewal norms required for foreign nationals to formally re-enter the country. But as she arrived in the country, she was turned away from the Kempegowda International Airport, Bengaluru, a report by news agency IANS said.

She was later allowed to come back to pick up her daughter and left the country within a few days.

According to the report, the mother and daughter are currently in Cambodia and awaiting a possible return to India.

"Despite not being Indian citizens, we call it home," Alicja Wanatko adds in her letter.

"It feels like everything is just destroyed again. I pray to Shiva and Nanda Devi to help us and I have decided to write to you because you are the most powerful person that can help me and my mum come back to India, my home. Please help us and allow to remove us from this blacklist," she added.

Her mother also tagged newly-appointed Home Minister Amit Shah in a tweet and asked for help.

Sir big congratulations on becoming Home Minister. Im writing for your help to remove myself and my minor child who studies in India from blacklist on entering the country. Case is in Mha but officers are not responding to emails. We are praying to God for help. @AmitShah https://t.co/qnad7JqA4V pic.twitter.com/itEDrHgvrm