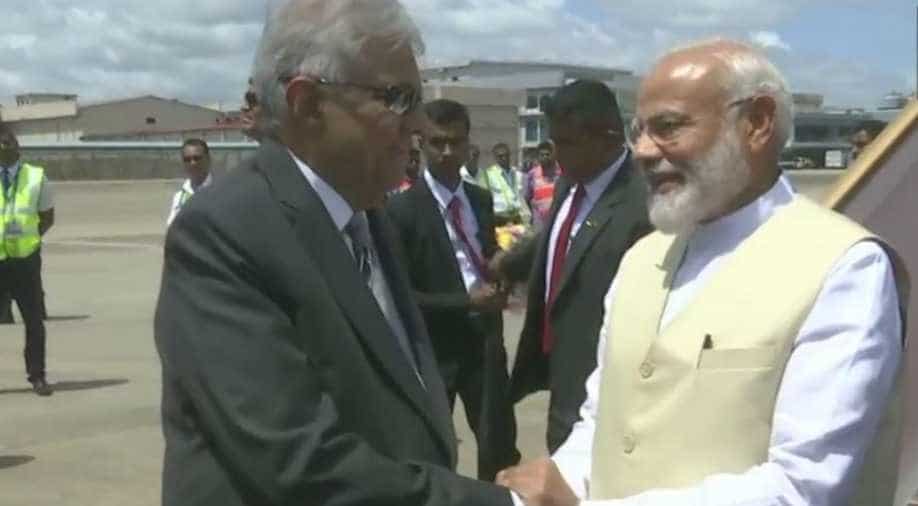 PM Modi will be holding talks with Sri Lankan President Maithripala Sirisena. He will also be called upon by the Sri Lankan Leader of Opposition, Mahinda Rajapaksa and later meet leaders of the Tamil National Alliance.

After a day-long visit to the Maldives, Prime Minister Narendra Modi on Sunday arrived in Sri Lanka on a state visit. The prime minister was personally received by his Sri Lankan counterpart Ranil Wickremesinghe in Colombo.

The prime minister's first stop was St Anthony’s Church in Colombo which came under the target of the ghastly Easter Sunday blasts in April. PM Modi paid tribute to the victims here.

"Started the Sri Lanka visit by paying my respect at one of the sites of the horrific Easter Sunday Attack, St. Anthony's Shrine, Kochchikade. My heart goes out to the families of the victims and the injured," the prime minister tweeted out.

I am confident Sri Lanka will rise again.

India stands in solidarity with the people of Sri Lanka pic.twitter.com/n8PA8pQnoJ

Later in the day, PM Modi will be holding talks with Sri Lanka President Maithripala Sirisena. He will also be called upon by the Sri Lankan Leader of Opposition, Mahinda Rajapaksa and later meet leaders of the Tamil National Alliance.

The visit is being called a solidarity visit, with PM Modi being the first head of government to visit the country after the 21st April terror attacks that killed more than 250 people.

No MoUs will be signed during the visit.

The prime minister will be given an official welcome at the President's Secretariat in the afternoon followed by a working lunch with the President and an interaction with the Indian community at 2 pm.

Sri Lankan envoy to India Austin Fernando told WION, "Definately he will like to visit places impacted because that is going to be standing with another set of people who have been victims of the disaster."

This is PM Modi's third visit to the neighbouring island nation.

On his jam-packed day today, the prime minister is also expected to offer prayers at the Tirumala temple in Tirupati later in the day. Andhra Pradesh Chief Minister Jagan Mohan Reddy will be accompanying him.

PM Modi, on his day-long visit to the Maldives on Saturday, addressed the island nation's parliament and, together with President Ibrahim Solih, inaugurated the coastal surveillance radar system built by India.

Both the leaders held wide-ranging talks to bolster their bilateral cooperation in key areas like defence and maritime security.

PM Modi said India will help promote cricket in the Maldives and fulfil President Ibrahim Mohamed Solih's mission to develop the sport in the country to consolidate people-to-people relations.

"Connected by cricket! My friend, President Solih is an ardent cricket fan, so I presented him a cricket bat that has been signed by Team India playing at the CWC2019," Modi said on Twitter.

The Maldives conferred Prime Minister Narendra Modi with its highest honour accorded to foreign dignitaries - the Most Honourable Order of the Distinguished Rule of Nishan Izzuddeen (Order of Nishanizzuddeen) in recognition his services to cement the longstanding, amicable ties between two countries and for the magnanimous assistance that India has continued to provide the Maldives.

Modi and Solih signed a number of MoUs yesterday.

Before embarking on his trip to the Maldives, the prime minister landed in Kerala and offered prayers at the Guruvayur Temple in Thrissur. He later addressed a public meeting organised by the state BJP workers, his first after assuming office for the second term, wherein he thanked BJP karyakartas and the people of Kerala for participating in the general elections.

"Kerala is as significant to me as Varanasi," he said.