Opinion: Will comeback of Rani Mukerji in film Hichki be a hit? 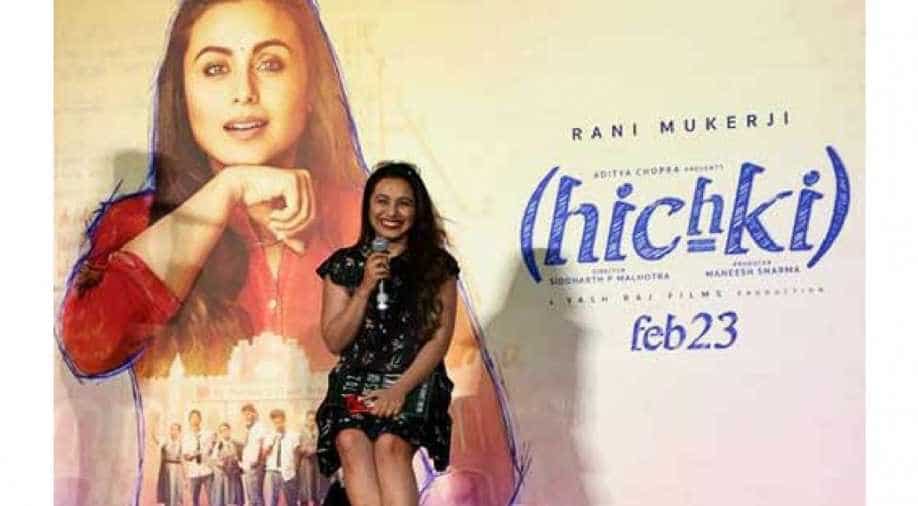 As the [once] gorgeous, dazzling and ever-popular Rani of Bollywood gets set to return – post-marriage and motherhood – one wonder whether the star whose dazzling smile and presence zapped her [once] zillion fans [ex-Pak President Pervez Musharaf included] can revive the same magic – minus any Hichki!

The charming, romantic heroine, teaming up seamlessly and super successfully with all 3 killer Khans and power-house actress who matched strides with the towering Big B in Black, can she hope to evoke that same level of excitement and anticipation at a time when Dipika  Padukone is blasting popular imagination with her youth, looks, energy and talent; when Piggy Chops is romancing the media and fans at home and abroad with her global persona; when the picture-perfect Barbie doll, Kat Kaif is sizzling announcing she is zinda - and how!

It’s a tricky terrain, where the temptation to try and repeat yesterday’s feat is strong, whether the call comes from within or by ambitious, persistent film-makers.  The once Queen-of-Hearts, Madhuri Dixit finally succumbed and gave the nod to Aaja Nach Le. Married and mother of two, she produced a spirited effort in the Yash Raj offering, but alas, few hearts went dhak-dhak.  Her subsequent films, Ishquian and Dedh Ishquian too, while critically acclaimed, did nothing to indicate a mass-driven encore.  The fabulous Sridevi too tried a TV serial which had to be peeled off the ceiling. She took the hint and focused on domestic bliss, marriage, and motherhood.  Her comeback vehicles – English Vinglish and Mom - were smart choices.  Central-character-driven, she played her age and pulled it off with success.  Juhi Chawla and Karishma Kapoor attempted to return too but were greeted by the law of diminishing returns.  Even the breathtakingly beautiful Aishwarya Rai Bachchan's Jazbaa and Aye Dil Hai Mushkil evoked the excitement of the wrong kind. Joining the list of comeback casualties are Raveena Tandon [Sandwich and Buddha Hoga Tera Baap], Rekha [Super Nani], Preity Zinta [Ishq in Paris], Manisha Koirala [Bhoot Returns], and Suchitra Krishnamurthy [My Wife’s Murder].  Others are bound to follow.

Actually, comebacks are a tough call.  Forget the corny and clichéd line “What do you mean the comeback?  I never went away.  I was just taking a sabbatical and looking for the right role and project”.

The truth is, this is not Hollywood where almost every top heroine is married, having two kids and yet continues to rock the charts and popular imagination.  Unfortunately in Bollywood, New is Now.  You can be the most loved and talented heroine in the country, but once you are married [Strike 1] and have kids [Strike 2], its best you stay at home playing wife and mummy dearest.

Why?  Because popular perception has changed dramatically about your persona.  From young, hot, single, you are now, well actually forget it!  If Kajol has been the glorious exception, it’s because she has been very selective about her role, banner, director, content and leading man. Dimple Kapadia too in earlier times. Although she’s no more the leading lady, yet with those killer looks she could easily have been Bollywood’s very own Mrs. Robinson!

Coming to Rani Mukherjee, after a lukewarm Mardani, will she follow this doomed list or break new ground to scale new heights?

She seems realistic to understand that audiences in 2018 are unlikely to go Kuch Kuch Hota Hai after seeing her.  Post marriage and motherhood, she will have to concentrate more on performance than looks to re-make the cut with this new-age audience.  So the challenge and opportunity will be on re-invention, re-cast and re-branding herself as an actress, and not be depending on the charm, beauty, sex-appeal exuding romantic charisma.

Will she be able to pull off her portrayal of Naina Mathur, a character handicapped with Tourette syndrome, a condition that forces an individual to make involuntary repetitive movements and sounds?  Will the movie viewer accept a once-romantic Rani in such an unusual role?  Well, in 2005, she delivered a knockout with Black, so it could be an encore.

Here’s hoping that Rani does break the rules and prove that with focus, dedication, realism and talent, comebacks with Hichkis, rock!