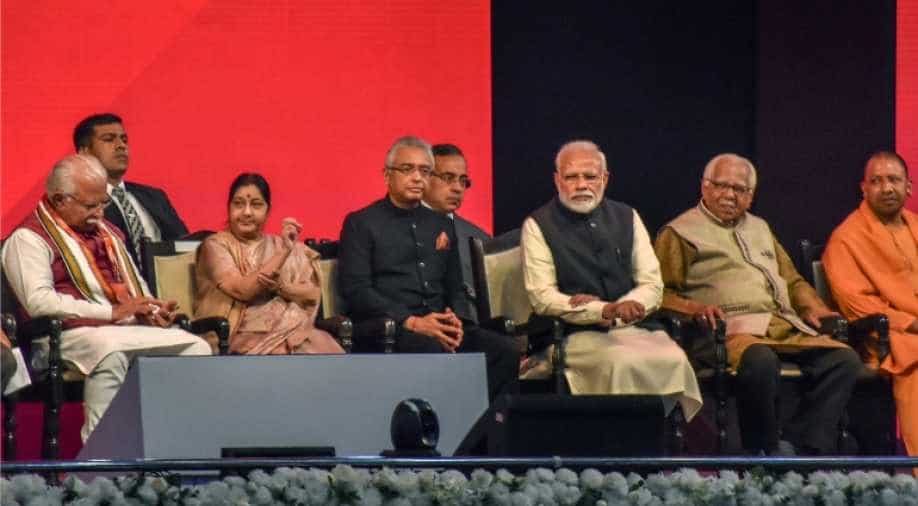 Prime Minister Narendra Modi on Tuesday described NRIs as India's brand ambassadors and said they were the symbols of the country's capabilities.

The prime minister was inaugurating the 15th Pravasi Bharatiya Diwas convention in his parliamentary constituency Varanasi.

"I consider NRIs India's brand ambassadors. They are the symbols of our capacities and capabilities," he told the gathering.

"People of Indian origin are in leadership roles in countries such as Mauritius, Portugal and Ireland," he said.

The prime minister added that his government had stepped in to rectify the situation.

The "85 per cent loot" taking place during the Congress regime had been plugged "100 per cent" through technology, he said.

"We have given about Rs 5,80,000 crore to people, transferred to their bank accounts through various schemes. Imagine, if the country was being run on the older system? Then Rs 4,50,000 crore would have vanished," Modi said.

Continuing his attack on the Congress, he said efforts to stop the "leakage" could have been made earlier as well but there was no intention and will power.

"Our government is moving towards ensuring that the aid given by the government is directly transferred to beneficiary accounts through direct benefit schemes," he said.

Mauritian Premier Pravind Jugnauth, who is the chief guest for the three-day event, also spoke on the occasion.

He hailed the prime minister for India's transformation through initiatives such as the Skill India and the Beti Bachao Beti Padhao schemes.

He also praised Modi's global stewardship in promoting clean energy and for setting up the International Solar Alliance.

Jugnauth announced that his country will hold a Bhagwad Gita Mahotsav next month and a Bhojpuri Festival next year.

For the first time, the three-day convention is being organised from January 21 to 23 instead of January 9 to allow participants to visit the Kumbh Mela in Allahabad and attend the Republic Day parade in the national capital.

The theme of this year's convention is 'Role of the Indian diaspora in building new India'.