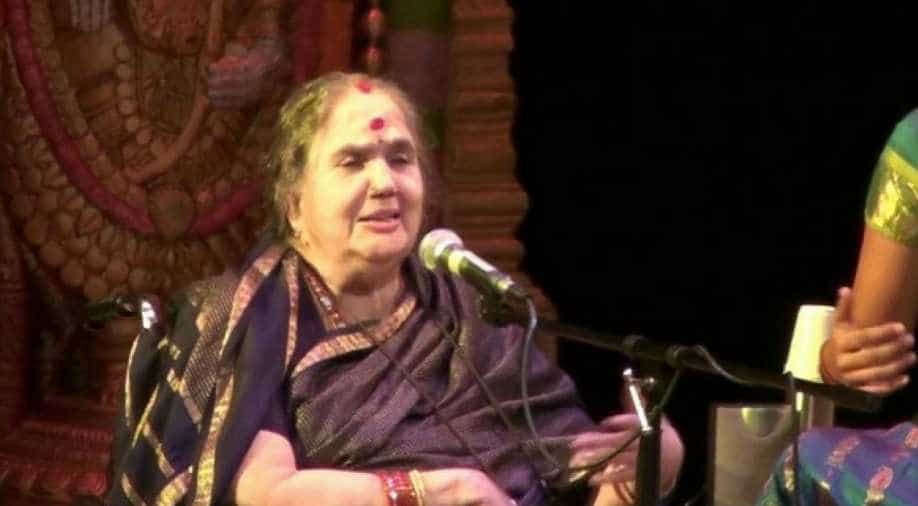 Carnatic vocalist Radha Vishwanathan had a history of Tuberculosis Meningitis since 1982 and would thus develop chest congestion very easily during winter. Photograph:( Bollywoodlife.com )

India is short of one more artist as the new year starts with the death of renowned Carnatic vocalist Radha Vishwanathan -- daughter of iconic classical singer MS Subbulakshmi -- breathing her last on January 2, 2018.

Vishwanathan, 83, had reportedly developed complications related to breathing. She was rushed to the Fortis Hospital Tuesday morning for treatment but her condition deteriorated and she succumbed to death late night.

The legendary vocalist's son, V Shrinivasan took to his Facebook page on January 3 to announce the sad news and wrote: “The voice which sang Amani Manadho Manyo Lokaswami Trilokadruth has now merged with that of her mother (M S Subbulakshmi)."

Radha Vishwanathan began her music career by accompanying her mother, India's musical treasure and legendary classical singer MS Subbulakshmi, a Bharat Ratna recipient -- during her concerts both within the country as well as abroad, for decades. Under Subbulakshmi's supervision, Vishwanathan developed a style of her own and rose to fame.

Remembering his mother, Shrinivasan added in the post, "As the ‘Venkatesa Suprabatham’, ‘Vishnu Sahasranama’ and ‘Bhaja Govindam’ play out in millions of temples and homes across the world, the voice of Radha will be heard, inseparable from the voice of her legendary mother."

The singer, however, had a history of Tuberculosis Meningitis since 1982 and thus developed chest congestion very easily during the winter months. Only this time, it became unbearable for her.

He also announced in his post that "the body has been kept for public viewing at 'Suswaralukshmi' 29 Royal Hermitage, Bannerghatta Road, Gottigere, Bengaluru 560083 from 7 am to 3 pm".

While the music industry suffers from the loss of Radha Vishwanathan, the Indian literature community mourned the death of legendary poet Anwar Jalalpuri on January 2 who died of a brain stroke.