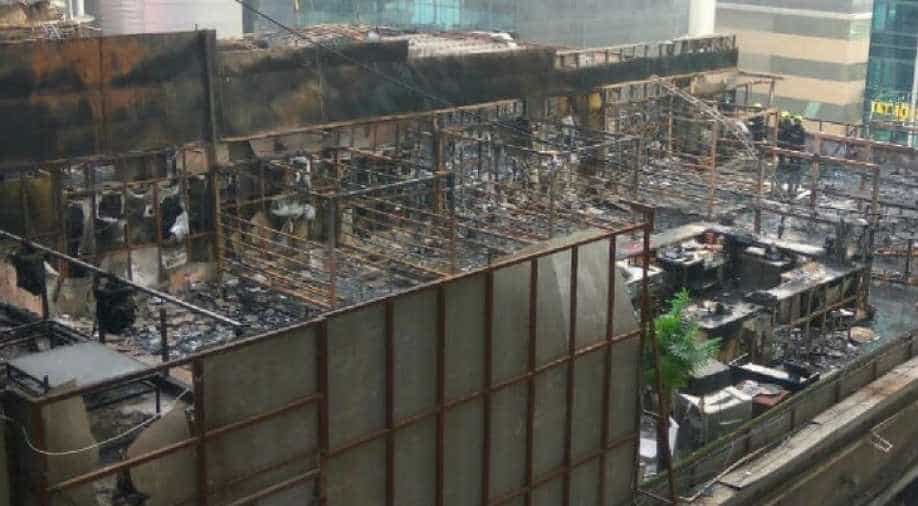 Both the accused will be produced in a court later in the day, the police said. Photograph:( ANI )

The Mumbai Bhoiwada Court on Monday sent two managers of the pub '1 Above' to police custody till January 9.

#KamalaMillsFire: Both managers of the pub '1 Above ' have been sent to Police custody till 9 January by #Mumbai's Bhoiwada Court.

The Mumbai police earlier arrested the two for their role in the Kamala Mills fire tragedy in Mumbai's Lower Parel area.

Gibson Lopez (34) and Kevin Bawa (35) were arrested by a team of sleuths from the NM Joshi Marg police station, an official said.

They were present in the pub when the blaze occurred in the early hours of December 29, but fled without helping the guests, the official said.

They have been booked under IPC sections 304 (culpable homicide not amounting to murder), 337 (causing hurt by an act endangering life or personal safety of others) and 34 (acts done by several persons in furtherance of common intention), the police said.

A day after at least 14 people including 11 women died and 54 others were injured in the midnight blaze, police had issued lookout notices against the two co-owners of the rooftop pub, Hitesh Sanghvi and Jigar Sanghvi.

Alternately, the police, on Saturday, had arrested the co-owners' uncle and cousin for allegedly providing them shelter. The Sanghvi brothers were booked on various charges, including culpable homicide not amounting to murder.

The police, after recording statements of survivors, says that the fire started at 1-Above pub which the management had denied and blamed the adjacent Mojo's Bistro for the incident.

The management of 1-Above had also previously claimed that they are being targeted as the owners of the adjacent pub are influential.

It had blamed Mojo's Bistro on the floor below for not having an emergency exit, leading to overcrowding of the escape avenues of 1-Above.

In the wake of the fire incident, police on Saturday registered three cases against mall and pub owners in the city on charges of illegal construction, officials said.