Infrastructure​​​​​​​, credit and aid, India reaches out to the neighbourhood 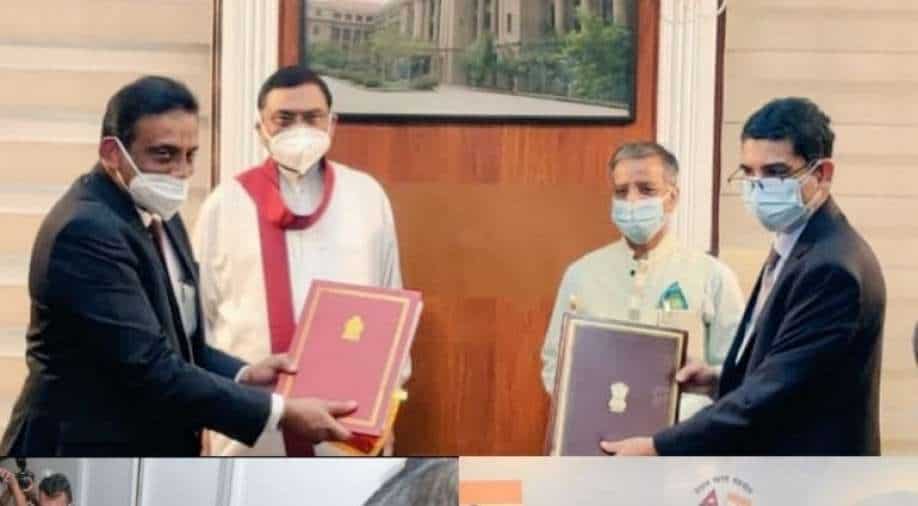 Indian envoys in Nepal and Sri Lanka were part of the events earlier this week. Photograph:( WION )

On Wednesday, India extended a $500 million line of credit to Sri Lanka for the purchase of petroleum products. The pact was signed between India's Export Import Bank (EXIM) and the Sri Lankan government in the presence of Sri Lankan finance minister Basil Rajapaksa and Indian envoy to the country, Gopal Baglay.

From infrastructure to credit, India has reached out to its neighbours from Nepal to Sri Lanka in a number of ways.

On Tuesday, India and Nepal signed a MoU for the construction of a motorable bridge over the Mahakali River with Indian grant assistance.

The MoU was signed between the Indian envoy to Nepal, Vinay Mohan Kwatra, and the Secretary, Ministry of Physical Infrastructure and Transport, Government of Nepal, Rabindra Nath Shrestha, and connects Dharchula (India) with Darchula (Nepal).

The project will increase cross-border connectivity between Nepal's Sudurpaschim province and India's Uttarakhand even as construction is set to commence soon.

As of now, traditional means, including suspensions, are used to go to either side, which obviously is not a very safe option. The Indian mission in Nepal said in a statement, "This is in line with the priority shared by both the governments to expand cross-border connectivity for streamlining commercial, cultural, and people-to-people exchanges."

On Wednesday, India extended a $500 million line of credit to Sri Lanka for the purchase of petroleum products. The pact was signed between India's Export Import Bank (EXIM) and the Sri Lankan government in the presence of Sri Lankan finance minister Basil Rajapaksa and Indian envoy to the country, Gopal Baglay.

In a release, the Indian mission in the country said, "As Sri Lanka’s closest neighbour and long-standing partner, India is committed to assisting Sri Lanka in its post-Covid economic recovery." The development comes even as the Sri Lankan finance minister and Indian external affairs minister spoke last month and New Delhi continues with its foreign exchange support of over USD 900 million to the country. India's overall development assistance to Sri Lanka stands at close to USD 4 billion.

Wednesday also saw the opening of an artificial limb camp in the country, which is supported by the Indian government and the Indian NGO Bhagwan Mahaveer Viklang Sahayata Samiti (BMVSS), well known for the distribution of Jaipur feet. The NGO, which is the world's largest organisation for providing artificial limbs and other related aids, had in the past organised 2 camps in Sri Lanka, one in Vavuniya in March-April 2010 and later in Jaffna in September 2011. More than 2500 people had benefited from these camps at the time, with over 1600 receiving the "Jaipur Foot."

Meanwhile, next week will see India begin to send 50,000 MT of wheat as humanitarian aid to Afghanistan. Afghan Envoy to India, Farid Mamundzay, has said that New Delhi will start delivering the promised wheat support to the Afghan people between February 10th and 12th.

He said, "India is going to deliver 50,000 MT of wheat in the next week or two, and is going to start delivery, which should be completed by months' time."

Pakistan has given all the assurances that we, the Afghan side and India, required to start the delivery of ​operation".

New Delhi has already sent 6 tonnes of medical supplies and half a million COVID vaccines to Afghan people in the last 6 weeks. In its budget announcement on February 1, India allocated Rs 200 crore to Afghanistan, even as the country has seen a Taliban takeover.