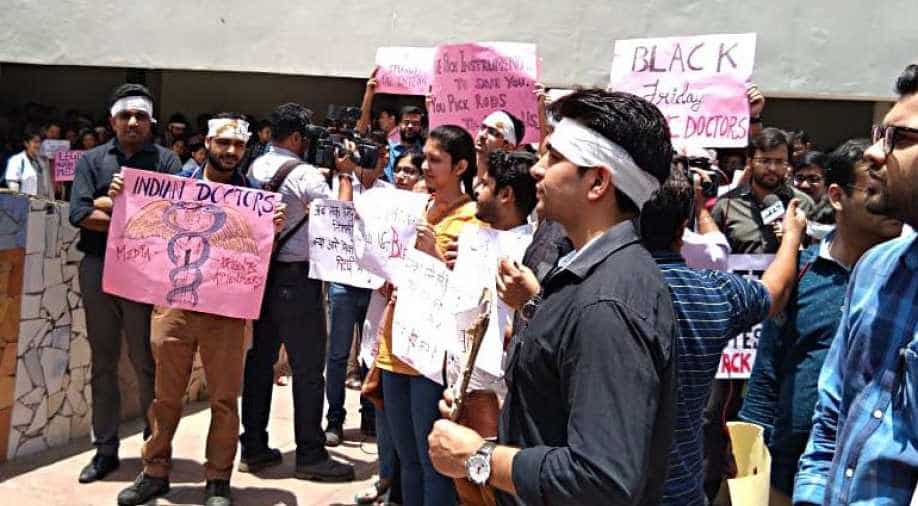 Doctors of PGI Chandigarh put a bandage on the forehead with black spot as a mark of protest against recent atrocities towards doctors in NRS Medical College, Kolkata in Chandigarh.  Photograph:( ANI )

The IMA has released a set of 10 directives to coordinate action in all the local branches under their jurisdiction in connection with the planned protest.

"The past few days have seen violence on doctors and hospitals in many states. The gruesome incident in NRS Medical College, Kolkata is of barbaric nature. Dr Paribaha Mukharjee, who was brutally attacked, is critical and fighting for his life. IMA condemns the violence perpetrated on a young doctor. Entire medical fraternity expresses our solidarity with the Residents who are on strike", the IMA said in a press release.

The IMA has released a set of 10 directives to coordinate action in all the local branches under their jurisdiction in connection with the planned protest. Among them are members directed to wear the black badges and give a memorandum to district authorities across the country.

Doctors have been on a protest from Tuesday in West Bengal after an intern at the Nil Ratan Sarkar (NRS) Medical College and Hospital was allegedly attacked by the relative of a patient who died on June 10.

Meanwhile, Doctors from various medical institutions in Telangana joined the nationwide protest demanding justice and protection to them in the wake of the recent assault on doctors in Kolkata.

Doctors of NIMS Hyderabad also gathered on the road in sympathy with the striking doctors of Kolkata.

Speaking to ANI, a doctor said, "We demand justice for what has happened with the junior doctors in West Bengal. If doctors are not safe then how come patients will be safe. All we need is safety for the saviours."

Talking about West Bengal Chief Minister Mamata Banerjee's ultimatum to the doctors to stop the protest, the doctor added, "This is not a political issue. It is not about politics but about the safety of the doctors. Sitting on such a position she is not supposed to give such statements."

The doctors have demanded the implementation of the Central Protection Act for them all across the country.