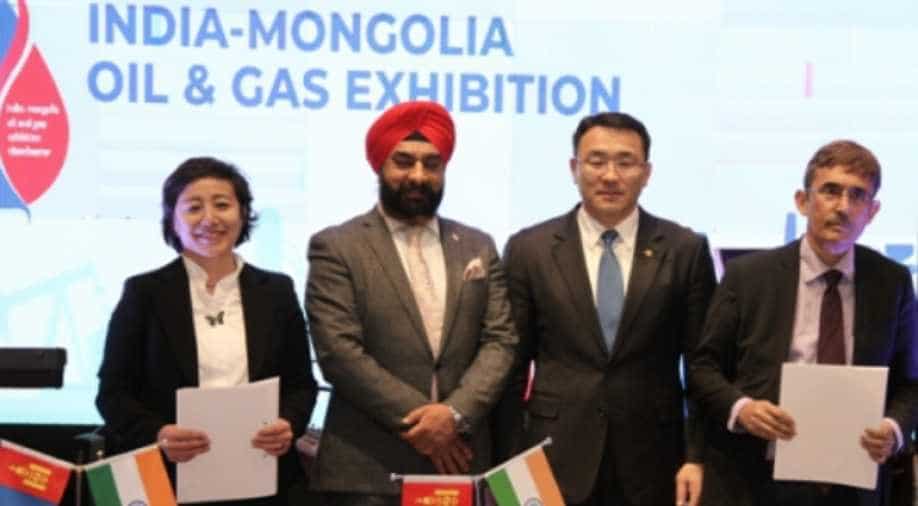 India will help build Mongolia's second oil refinery and has extended a $1 billion Line of Credit to the country for it.

Indian companies are increasingly eyeing Mongolia's oil and gas sector with first every exhibition on the energy sector with the participation of several companies and an agreement on an India built a Mongolian oil refinery.

Engineers India Ltd (EIL) and Mongolia's Mongol Refinery have signed an agreement on the Project Management Consultancy (PMC) for setting up of the first oil refinery in the eastern province of DornoGobi. The agreement was signed in the presence of Mongolian Minister of Mining Dolgorsürengiin Sumyaabazar and the Ambassador of India to Mongolia MP Singh.

India will help build Mongolia's second oil refinery and has extended a $1 billion Line of Credit to the country for it. The refinery will be built in the city of Sainshand in Dornogobi province and will have a capacity of 1.5 MMTPA which will be implemented with Exim Bank funding.

During the visit, Prime Minister Narendra Modi's 2015 visit to the country, which was the first ever visit of an Indian PM to the landlocked country, $1 billion credit line was announced which is being used to build the first ever oil refinery for the country. Last year Mongolian PM Ukhnaagiin Khürelsükh and Home Minister Rajnath Singh took part in the groundbreaking ceremony for that Oil Refinery. It is expected to be completed by mid-2023.

In a bid to increase engagement between oil and gas companies to both countries, EIL along with Mongol Refinery and Ministry of Mining of Mongolia earlier this week organised an exhibition in Mongolia and saw the participation of Mongolian Foreign Minister Oyun-Erdene, along with Mongolian Minister of Mining Dolgorsürengiin Sumyaabazar and head of Cabinet Secretariat.

G Ganbold, Mongolia's ambassador to India told WION, " Around 35 Indian companies participated in the exhibition. Mongolia government and business community showed interest in working with Indian companies. There will be second expo in August in which Indian pharma companies will participate."

Mongolia currently exports crude oil to China and imports petroleum products from Russia. India led refineries will help Ulaanbaatar reduce its dependency on Moscow and Beijing. According to the Petroleum Authority of Mongolia, the country has reserves of 2.3 billion barrels of oil.

There has been a number of high-level visits from India to Mongolia including a visit by External Affairs Minister Sushma Swaraj and Home minister Rajnath Singh to the country.