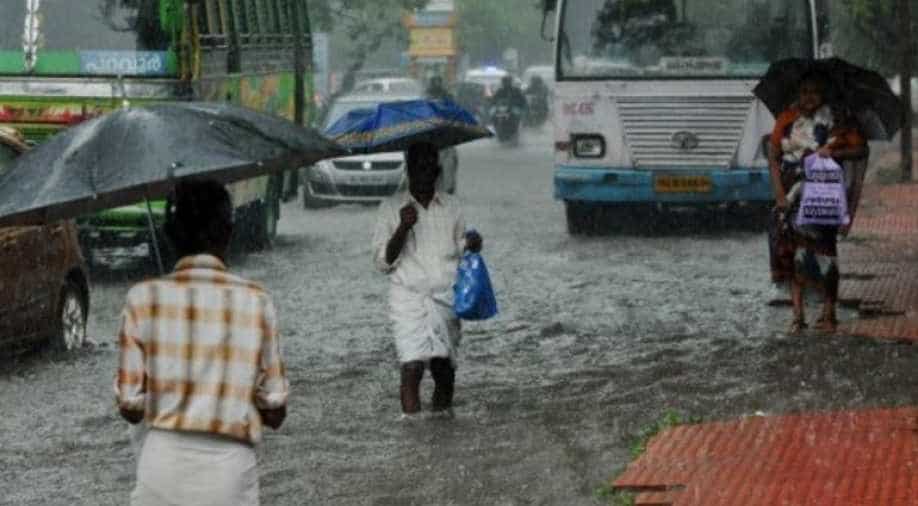 Due to the heavy rainfall, shutters of four dams have been opened.

Seven fishermen are reported missing as rains intensified and lashed several parts of Kerala for the third day on Saturday under the influence of the southwest monsoon.

Heavy rains have been predicted in the state and there is a red alert in some districts of the state. Due to the heavy rainfall, shutters of four dams have been opened.

The state government has set up scores of relief camps across the state.

Three missing fishermen are from Kollam's Neendakara district and the remaining are from Vizhinjam of Thiruvananthapuram districts.

Local authorities in Kerala on Saturday issued alerts across the state anticipating heavy downpour in the next few days.

The move is taken after India Meteorological Department (IMD) bulletin predicted heavy to very heavy rainfall in isolated parts of the region.

The state disaster management authority in the morning issued a red alert in Kasargod for today (July 20) and Kozhikode and Wayanad for July 21.

An orange alert has been issued for Idukki, Kannur, Kozhikode, Malappuram and Wayanad for today.

In order to control the swelling water which is nearing the full capacity because of the relentless rain, two shutters of Malankara dam situated in Idukki and nine shutters of Bhuthathankettu in Ernakulam district and one shutter of each Kallarkutty and Pamba dams were opened in the morning on Friday.

Scores of families residing near the coastal line have been evacuated from affected areas and have been shifted to relief camps set up by the authorities.

In Kannur, dozens of house near the Thavakkara railway station were waterlogged and the locals were shifted to relief centres.

Besides, trees are reported to have been uprooted in several isolates pockets of the states causing soil erosion.