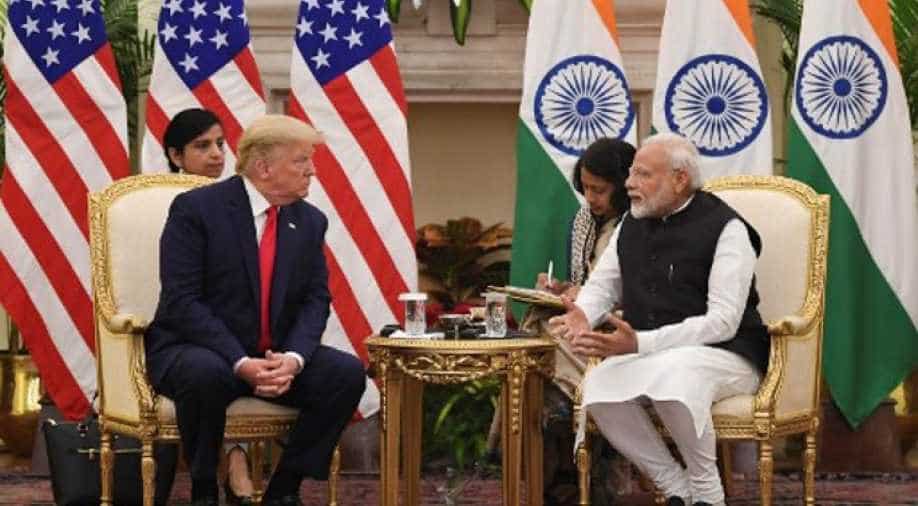 Trump being the master deal-maker had said on Monday that he is holding out for a bigger, better and a fantastic deal but today the US president didn't mince words

In an almost 40 minute-long news briefing, President Trump touched upon an array of issues critical to both the US and India from the Kashmir issue to India's tariffs, H-1B visas, religious freedom and CAA protests in Delhi.

On the Citizenship Amendment Act, the US president was dragged into the issue at least four times during the press conference. One question after another indirectly required him to make his stand clear and each time his answer reiterated what the Indian government has been saying for the longest time that it is an internal issue.

Then came Kashmir, the US president went on to acknowledge the fact that the issue needs to be resolved bilaterally and that India and Pakistan are working on it.

"I didn't say anything about that (being mediator). Kashmir obviously is a big problem between India and Pakistan, they are going to work out their problem. They have been doing it for a long time," Trump said.

There were also questions on the fight against terror and obviously Pakistan.

While the US president reiterated the need to tackle the menace, there was a balancing act when it came to Pakistan.

The US president spoke about his "good relationship" with the Pakistan prime minister and in a rather diplomatic reply, he said there are two sides to every story.

Also Read: Anything I can do to mediate, have great relations with Modi, Imran: Trump on Kashmir

"There are two sides to every story. We discussed terrorism at length today. We talked a lot about it at length today. No question it is a problem. They are working on it. I said I will do whatever I can do to help because my relationship with both gentlemen (PM Modi & Pak PM) is so good."

Trump being the master deal-maker had said on Monday that he is holding out for a bigger, better and a fantastic deal but today the US president didn't mince words.

He stood his ground on tariffs saying that India is probably the highest tariff nation in the world.

No surprise there, given that he has earlier described India as the king of tariffs.

In particular, he complained about the heavy import duty on Harley Davidson motorcycles.

"India is probably the highest tariff nation in the world… we have to stop that… I think we are understanding each other," he said.

"Harley Davidson has to pay tremendous tariffs in India. When India sends motorcycles to the US, there is virtually no tariffs. For the most part, there are absolutely no tariffs. I just said that is unfair and we are working it out.”

On to the issue of H-1B visas, the president's reply was rather vague. He said the issue was everybody's to solve and then went on to talk about the affection of the Indian diaspora towards him.

He may have left a lot unanswered.