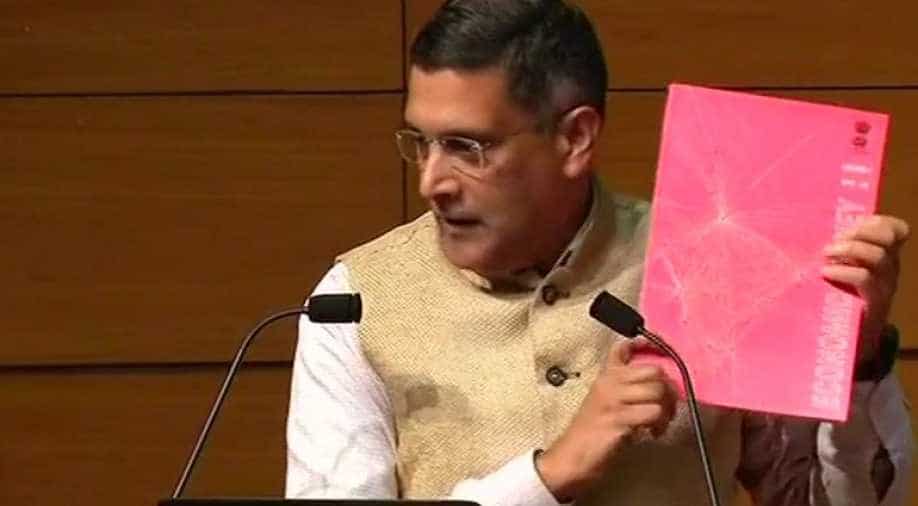 Subramanian makes his assertion in his upcoming book "Of Counsel: The Challenges of the Modi-Jaitley Economy" to be published by Penguin.

Subramanian was Chief Economic Adviser when Prime Minister Narendra Modi announced demonetisation on November 8, 2016. He has since quit.

Subramanian makes his assertion in his upcoming book "Of Counsel: The Challenges of the Modi-Jaitley Economy" to be published by Penguin.

"Demonetisation was a massive, draconian, monetary shock: In one fell swoop, 86 per cent of the currency in circulation was withdrawn. The real GDP growth was affected by the demonetisation. Growth had been slowing even before, but after demonetisation, the slide accelerated," IANS quoted Subramanian as writing in the book.

"In the six quarters before demonetisation, growth averaged 8 per cent and in the seven quarters after, it averaged about 6.8 per cent (with a four-quarter window, the relevant numbers are 8.1 per cent before and 6.2 per cent after)," IANS quoted Subramanian as saying in the chapter "The Two Puzzles of Demonetisation — Political and Economic".

Subramanian goes on to say that he does not think anybody is disputing the fact that demonetisation slowed growth. What they are debating is how big the hit was — did it slow GDP growth by two percentage points or less?

"...But when a shock like demonetisation occurs, that primarily affects the informal sector, relying on formal indicators to measure overall activity will overstate GDP. This hypothesis goes only a small way towards explaining the puzzle since any squeeze in informal sector incomes would depress demand in the formal sector, and this effect should have been sizable."

Subramanian answers his question by saying people may have found ways around the ban, the extension of credit for example. Or e-payments.

"Or, there may be other, completely different explanations that have eluded my understanding of demonetisation, one of the unlikeliest economic experiments in modern Indian history," he writes.

Looked at from the political perspective, Subramanian says the shock move was unprecedented. Countries either go in for demonetisation piecemeal or if they do it at one swoop, they do it during times of war or hyperinflation.

But, the IANS report quotes Subramanian as saying, the BJP government did not seem to pay a political price for the move. (Subramanian points to the BJP's massive victory in the UP elections a little after demonetisation was announced as proof.)

The answer that has been put forward, says Subramanian, is that perhaps the poor overlooked their own hardships because they thought the rich were having an even harder time. "I lost a goat, but they lost their cows," writes Subramanian.

According to this view, he says, the cost to the poor was unavoidable collateral damage for the attainment of a greater goal.

But he adds that the answer is not very plausible, for the collateral damage was in fact avoidable.

He finally goes on to say that perhaps what worked for the policy was that it hurt so many people.

"Understanding the political economy of demonetisation may require us, therefore, to confront one overlooked possibility -- that adversely impacting the many, far from being a bug, could perhaps have been a feature of the policy action.

"Not necessarily by design or in real time, but in retrospect, it appears that impacting the many adversely may have been intrinsic to the success of the policy," IANS quoted Subramanian as writing.