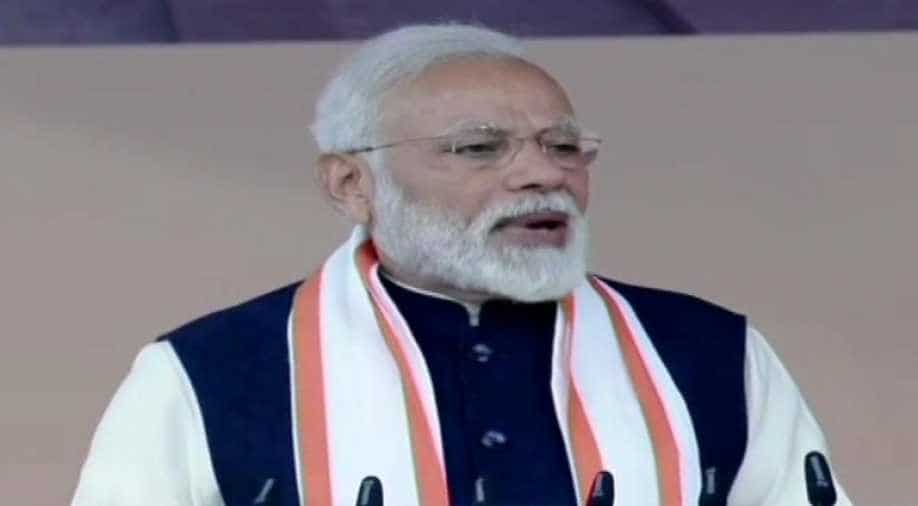 Without naming Naidu and in an apparent reference to his aligning with the Congress, Modi said the TDP supremo was now hobnobbing with those who "spared no efforts to hurt" Andhra's pride.

The Prime Minister also listed the Centre's various efforts in the state, in what is seen as a response to Andhra Pradesh Chief Minister N Chandrababu's taunt asking him if he was not ashamed to visit the state with 'empty hands.'

Without naming Naidu and in an apparent reference to his aligning with the Congress, Modi said the TDP supremo was now hobnobbing with those who "spared no efforts to hurt" Andhra's pride.

He also lashed out at those whom he described as speaking in support of Pakistan against the backdrop of the tensions between the two countries, and asked them to 'introspect' on why their comments were being lauded in the neighbouring country.

Apparently referring to some opposition parties and the proposed Mahagathbandhan, Modi said "Why are the parties of 'Mahamilavat' (highly adulterated) indulging in petty politics that is benefiting the enemy. In their hatred for Modi, they have started hating the country."

Visakhapatnam was a 'dream city' of Andhra youth and the Centre had accorded priority to fulfil their aspirations, he said, addressing a public meeting.

"Today I have come here with a good news. The government has taken a proactive step on a long pending demand. Centre has decided to create South Coast railway zone with Visakhapatnam as its headquarters," Modi said.

This was as per the Andhra Pradesh Reorganisation Act, 2014, he said.

Other initiatives for the state included upgradation of the local airport, an IIT, Indian Institute of Petroleum and Energy, ESIC super speciality hospital and creating oil reserve facilities, he said.

The 'pradhan sevak' (principal worker) was totally dedicated for the development of the state and the NDA was doing it with full vigour and honesty as "there is no baggage on us."

"We have no fear of what will happen if some file is opened. Only those who had sinned will be afraid. This fear is consuming our rivals, among who are those trying to establish a dynasty," he said without naming anyone.

In an apparent reference to Naidu, he called him an "expert in U-turn," and said had he fulfilled the promises made by him, he could not have had to blame the Prime Minister for his follies.

"He (Naidu) is hobnobbing with those who spared no efforts to hurt Andhra's pride," Modi said in an apparent reference to the TDP leader's aligning with the Congress.

Ahead of the Lok Sabha and state assembly polls, Modi has been training his guns against Naidu, seeking to remind him that the Telugu Desam Party founder, the late NT Ramarao, had founded the very party against the Congress.

In a letter to the Prime Minister on the eve of his scheduled visit to the port city, Naidu had asked Modi if he was not ashamed to visit the state with 'empty hands', saying he owed an explanation to 'five crore people' over unfulfilled promises,vis-a-vis the AP Reorganisation Act,2014.