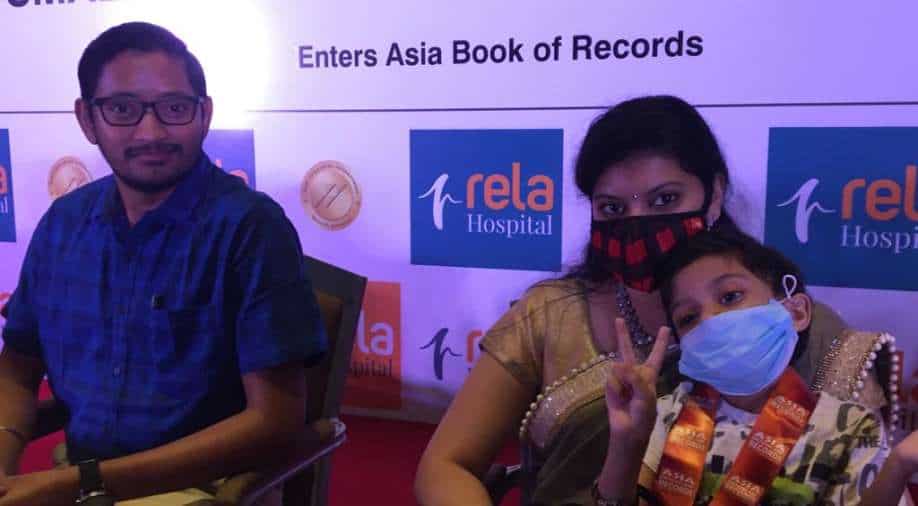 4-year-old Guhan was diagnosed with a condition known as ‘volvulus’ Photograph:( WION )

A marathon seven-hour long surgery involving eight doctors and 24 nurses was performed in the southern Indian city of Chennai to save the life of a 4-year old whose small intestine had stopped functioning.

The complicated surgery involved precisely removing 150cm of the father’s small intestine and transplanting it to his son.

More than three months after the surgery, as the father and son are going about their daily lives, doctors opened up on the extremely rare condition faced by the boy and the transplant that they performed.

It all began when Guhan, a four-year-old boy, developed sudden and erratic vomiting.

Upon visiting a hospital, the family learnt that their son was diagnosed with a condition known as ‘volvulus’, which meant that his smaller intestine was twisted and thereby cut off from blood flow.

Hence, all the cells in his small intestine were dying and the organ was losing its function. With the absorption of nutrients being the key function of the small intestine, this organ’s failure was a serious threat to the young boy’s life.

With no option left, the parents had to allow the doctors to remove their son’s small intestine entirely in order to save him.

However, the young boy had to endure extreme hardships as he had to be endlessly hooked onto intravenous feeding (nutrients being fed directly into the bloodstream), even for his basic sustenance.

He just couldn’t be fed like kids of his age, as the food he ingests normally would cause further health complications in his already fragile body.

Later, after consulting Rela Hospital in Chennai, the family was made aware of the possibility of intestinal transplantation. Despite the risks, the family went ahead with the procedure, as it was the only hope for saving their ailing son.

Swaminathan, Guhan’s father donated 150cm of his small intestine —which could be as long as six meters—for the transplant.

Dr Naresh Shanmugam, senior consultant, Liver and Gastro specialist for children, explained that volvulus can occur only twice in thousand cases, and was an issue seen during the initial growth years.

He added that twisted intestines could surgically be untwisted when the condition is detected early enough.

When queried about how the 150cm transplanted small intestine could carry out the function of the organ that spans up to six meters in length, he told WION that it would eventually be functional and can last the boy his entire lifetime.

According to prof. Mohamed Rela, who headed the team that performed the surgery, such transplants always faced the risk of organ rejection by the recipient.

However in this case, adequate care was provided to mitigate that issue. He also explained that such intestine transplants can’t be done from one living adult to another. In the case of adults, such organs can only be removed from cadavers, he added.

With the surgery being successfully completed on September 13 last year, Guhan had to completely depend on intravenous nutrition for several months.

Gradually, as the new organ was accepted by his system, he began to consume food normally.

According to Guhan’s parents, going in for a transplant was terrifying, but they went ahead with it, owing to the doctors’ reassurance and for giving their son a second chance at life.

“For those that suffer failure of the small intestine, only intravenous nutrition would be possible. However, even that is not viable after 10-15 years. In most cases, it leads to gradual loss of life,” Rela explained.

Intestine transplants are not as common as liver of kidney transplants, he added.

According to the Asia Book of Records, this transplant procedure was recognized as Asia’s Youngest Small Intestine Transplant surgery.