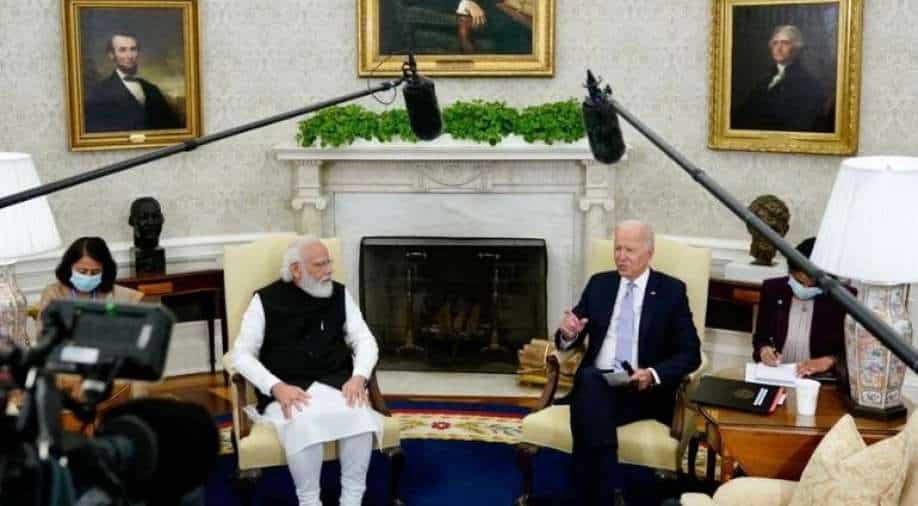 President Joe Biden, in his introductory remarks to Prime Minister Narendra Modi at their first in-person summit, said India and the US were beginning a new chapter in relations.

The relationship between India and the United States, the world's two greatest democracies, is destined to become stronger, closer, and tighter, US President Joe Biden said on Friday as he hosted Prime Minister Narendra Modi for their first in-person bilateral summit.

He stated the two countries were beginning a new chapter in India-United States relations.

"I have known you for a long time. I am glad that you have come back to the White House… You are well aware of our history… Our relationship has always been good," Biden told Modi.

The two leaders met at the Oval Office and discussed a wide variety of issues, including COVID-19, climate change and economic cooperation.

They have met before when Biden was vice president, but this is the first time Biden is hosting Modi since becoming the 46th US president in January.

Here are some quotes from US President Joe Biden's remarks to Indian Prime Minister Narendra Modi:

"Welcome. I want to welcome my friend, who I've known for some time, back to the White House. And Mr Prime Minister, we're going to continue to build on our strong partnership."

"When I showed the Prime Minister to his seat, I pointed out that seat is occupied almost every day by an Indian American."

"The Vice President's mother was from India, a scientist and a remarkable woman, " he said, referring to Shyamala Gopalan Harris, the mother of his deputy Kamala Harris.

"As I think you know, Mr Prime Minister, I've long believed that the US-India relationship can help us solve an awful lot of global challenges."

"In fact, back in 2006, I sent that hope out where I said that by 2020... India and the United States would be among the closest nations in the world to one another."

"And maybe I shouldn't – these are not part of my prepared remarks, but when I was in Mumbai as vice president, I finished meeting with the equivalent of the chamber of commerce. And afterwards, the Indian press asked me, "Do I have any relatives in India?"

"The next morning, I had a press conference going away, and the Indian press, some of these folks, said you have five Bidens in India. And although we never admitted it – jokingly – I've found out that there was a Captain George Biden who was a captain in the East India Tea Company in India."

Biden turned to Modi and quipped: "That's hard for an Irishman to admit."

Biden then said to the press: "I shouldn't be so casual with you all. I hope you understand the humour in it. The end result was, he apparently stayed and married an Indian woman and I've never been able to track it down, so the whole purpose of this meeting is for him to help me figure out."

The US President smiled and there was laughter from the people in the room.