Assam floods: Over 160 people rescued by Army in night operation 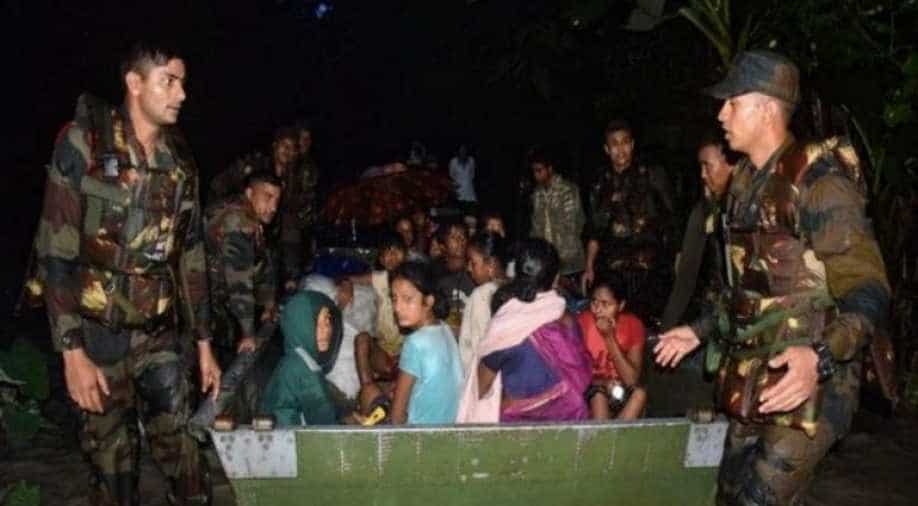 Army personnel carried the flood-affected people on their shoulders and in the army boats and moved them to a safer place on Monday night.

Indian Army personnel rescued at least 160 people affected due to floods triggered by incessant rains in the Nalabari district during a night operation.

Torrential downpour amounted to a breach of embankments of the Pagladiya River in Nalbari, flooding 133 villages and affecting 1, 50,000 people across the district.

Army personnel carried the flood-affected people on their shoulders and in the army boats and moved them to a safer place on Monday night.

The flood situation remains grim in several states across the country, more than a hundred National Disaster Response Force (NDRF) troops have been deployed in various flood-affected areas of the country including Bihar and Assam.

In addition, the 24X7 NDRF control room in Delhi is closely monitoring the situation to coordinate with various agencies for further deployment, said an official statement on Monday.

The torrential downpour in the state of Assam continued to wreak havoc on Monday, causing the flooding on National Highway 37 and affecting 200 villages in Morigaon district alone due to the rising water levels of river Brahmaputra.

Large areas of Kaziranga National Park were submerged, and the animals from the sanctuary were taken to highlands.

Ferry services to Umananda Devaloi Temple, located at the Peacock Island in the middle of the river Brahmaputra, were halted on Monday, leaving the priests and other people on the island stranded.

In Assam, 14 NDRF teams have been deployed in Barpeta, Bongaigaon, Biswanath, Chariali, Cachar, Dhemaji, Golaghat, Guwahati, Jorhat, Lakhimpur, Morigaon, Sivasagar and Tinsukia to tackle the worsening flood situation in the districts due to torrential rain and overflowing rivers and water bodies.

On Monday, in the low lying areas of district Bishwanath, Chariali, Golaghat, Morigaon and Tinsukia, NDRF evacuated 460 people and shifted them to safer places and so far over 3000 people have been evacuated in Assam by the force.

The Assam flood situation was brought up in the Parliament on Monday with Congress parliamentarian and Assam Congress Committee President Ripun Bora giving a Zero Hour Notice over flood situation in his home state.