A friend and supporter, Russia has given importance to strengthening ties with India: PM Modi 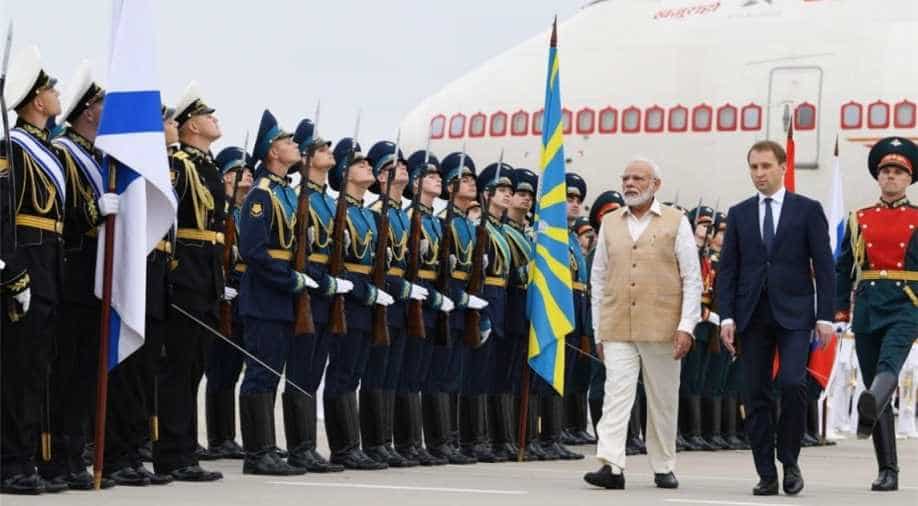 PM Modi spoke about his day with the Russian president and their visit to the Zvezda shipbuilding complex.

The prime minister thanked Russian President Vladimir Putin and his government for conferring country's highest civilian award - guard of honour - and said that it was an honour for him to visit Russia and meet the president for the third time this year.

PM Modi spoke about his day with the Russian president and their visit to the Zvezda shipbuilding complex.

"This exhibits the new dimension to strategic cooperation between our countries. I am excited to be part of the 20th edition of the India-Russia Summit," PM Modi said.

The prime minister added that he is humbled by the welcome of the Russian people.

"This meet exhibits the friendly ties between our countries, it is a matter of pride for 1.3 billion Indians," PM Modi said.

PM Modi in Russia: You've announced that I'll be awarded with Russia's highest civilian award. I express my gratitude to you & people of Russia. This demonstrates the friendly relations between the people of our 2 countries. It's a matter of honour for the 1.3 billion Indians. pic.twitter.com/lnIPv1NQjV

Describing Russia as a friend and a nation that has supported India, the prime minister stated that Russia has personally given importance to bolstering its strategic partnership with India.

"Some very important talks are due to take place at the Summit which should further strengthen our ties and take all aspects of our ties - like defence, nuclear energy, space -  to new heights," he said.

Prime Minister Narendra Modi and Russian President Vladimir Putin on Tuesday paid a visit to the 'Zvezda' Shipbuilding Complex with an aim to learn about Russia's exemplary capabilities in the shipbuilding sector as well as explore possibilities of cooperation in this area.

PM Modi arrived in Vladivostok, Russia earlier today, on a two-day visit, to hold talks with Putin on the sidelines of the Eastern Economic Forum to give a new impetus to bilateral ties between India and Russia.