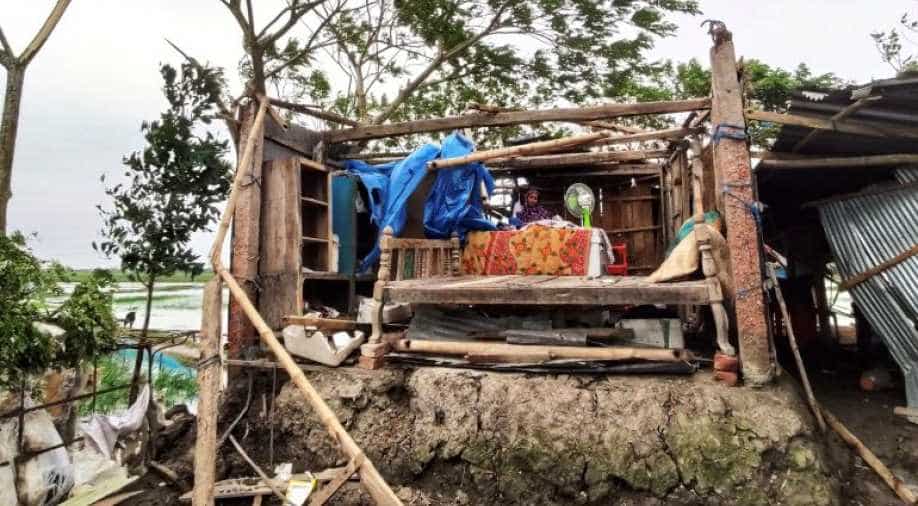 A woman is seen inside her damaged house after cyclone Bulbul hit the area in Khulna, Bangladesh, November 10, 2019. Photograph:( Reuters )

At least 13 people were killed in Bangladesh and India after cyclone Bulbul lashed coastal areas this weekend, though prompt evacuations saved many lives and the worst was over, officials said on Sunday.

Another victim, a 60-year old fisherman, had refused to evacuate.

Two fishing boats have not yet returned and relatives have been unable to contact the roughly 36 men on board, added Anwar Uddin, a local public representative in the southern Bhola district.

India`s meteorological department said the cyclone was expected to weaken but warned fishermen not to venture into the sea for the next 12 hours.

Some 2 million people from all of Bangladesh`s 13 coastal districts huddled in about 5,558 shelters on Saturday night. Outside, wind speeds rose to between 100 and 120 km per hour (62-75 mph), and some low-lying coastal areas were flooded.

Jetties are built so that a channel to the river and ocean stays open for navigation purposes as well as to prevent streams from meandering naturally.

At least seven persons have died and 4.65 lakh people have been affected due to Cyclone Bulbul in the state, West Bengal`s Department of Disaster Management and Civil Defence said.

Also, extensive damage to Sunderbans forests has been reported and a detailed assessment is being done, the department had said.

Due to the speedy winds, several trees were uprooted and roads were blocked forcing the administration to carry out road clearance work.

The deep depression weakened into a depression over southeast Bangladesh and adjoining south Tripura at 05:30 am on Monday, according to the India Meteorological Department (IMD).

It will weaken into a low during the next six hours, IMD stated in its latest update over cyclone `Bulbul`.The deep depression over coastal Bangladesh and neighbourhood lay centred at 5:30 pm on Sunday about 170 km east-northeast of Sunderban National Park.

Electricity and piped water supply services in Odisha, which were affected by severe cyclone Bulbul, are expected to be completely restored in several districts of Odisha by November 12, Office of the Special Relief Commissioner said on Sunday.