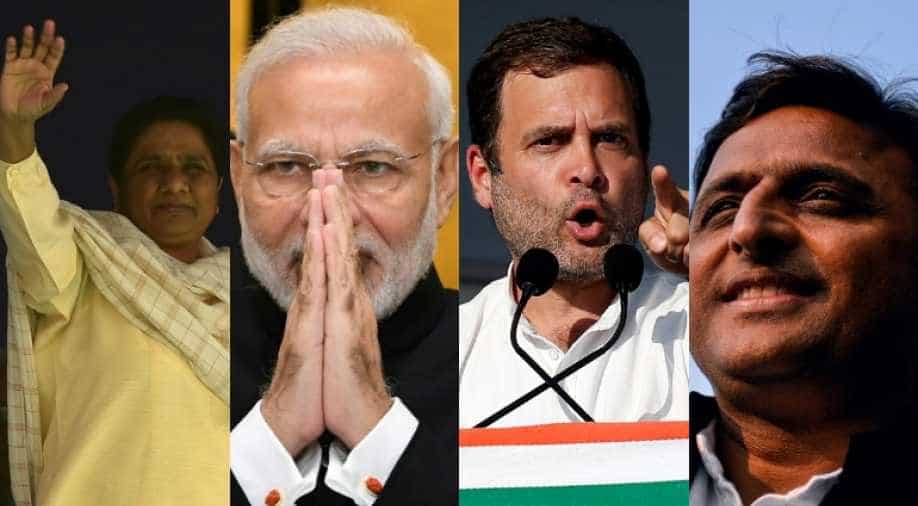 During the last Lok Sabha polls, the NDA registered a landslide win with 71 seats out of 80 in Uttar Pradesh.

With the counting of votes due on Thursday, all eyes will be on Uttar Pradesh which offers a massive chunk of 80 parliamentary constituencies. The strategic significance of the state in deciding the fate of the incumbent central government could never be undermined.

The state has given 10 prime ministers since independence. Going by the exit polls predictions, the BJP-led NDA is likely to get the lion's share of Uttar Pradesh's 80 Lok Sabha seats. Times Now-VMR said the NDA will get 58 seats in UP and C-Voter suggested 38 seats for the alliance. The poll of polls, a collection of various exit polls, predicted 43 seats for the NDA.

For Rahul Gandhi-led Congress, the pollsters painted a dismal picture giving just a couple of seats to the party in the state. The SP-BSP-RLD alliance is predicted to bag between 20 to 40 seats, pollsters said.

During the last Lok Sabha polls, the NDA registered a landslide win with 71 seats out of 80.

Along with its NDA constituents, the BJP won 336 out of 543 seats and formed the government at the Centre. It was for the first time in about three decades that a party won such a huge number of seats.

This time around, the exit polls show the BJP cornering over 300 seats and form a government at the Centre comfortably. The party, along with its allies, is predicted to sweep a lion's share of the Hindi heartland of the nation including states like Uttar Pradesh, Madhya Pradesh, Gujarat, Maharashtra, Bihar as well as the national capital.

With the counting of votes progressing on Thursday, fates of some of the political bigwigs will be sealed who are contesting from the key constituencies of Uttar Pradesh.

Varanasi: Prime Minister Narendra Modi is seeking a second term from Varanasi Lok Sabha seat where he is in the contest with Congress' Ajai Rai.

Gorakhpur: Here, the fight is mainly among Madhusudan Tripathi of the Congress, Ravindra Shyamnarayan Shukla alias Ravi Kishan of the BJP and Rambhual Nishad of the SP.

Sultanpur: The seat will witness a close contest as the BJP's candidate is the Union minister Maneka Gandhi, who is replacing her son Varun Gandhi.

Congress candidate Sanjay Singh will give tough competition to Maneka Gandhi, as Congress has had a hold on this seat in 7 Lok Sabha elections against the BJP's 4 wins in this constituency.