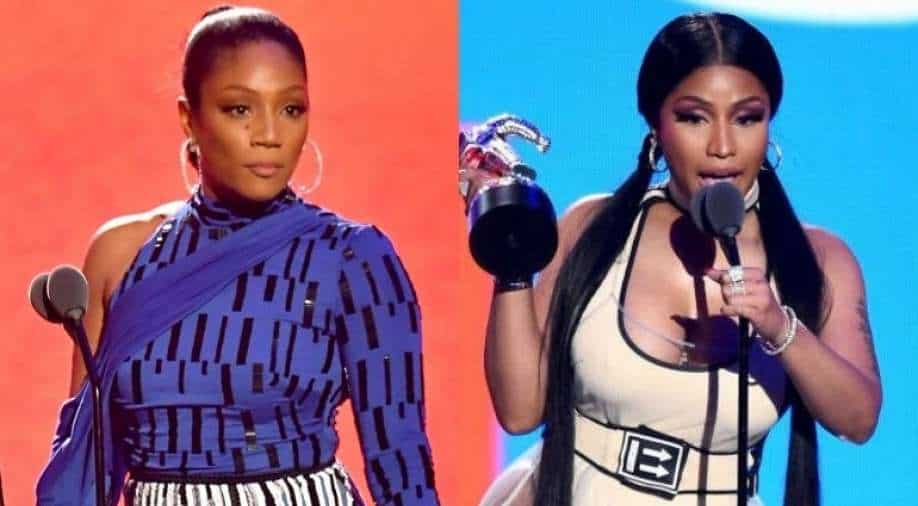 During a recent Clubhouse conversation, Haddish seemed to have shaded Minaj when the two were compared by one fan. To which, another fan joked that, unlike Minaj, Haddish comes to appearances on time.

There is tension brewing between comedian Tifanny Haddish and rapper Nicki Minaj. Or so fans of the two artists seemed to believe owing to a recent comment made by Haddish.

During a recent Clubhouse conversation, Haddish seemed to have shaded Minaj when the two were compared by one fan. To which, another fan joked that, unlike Minaj, Haddish comes to appearances on time.

The comedian decided to add on that and said, "And unlike Nicki, I treat everybody with respect and dignity,” she said.

Most were left wondering that what made Haddish target Minaj in such a way but if one digs a little deeper, it seems the two had a minor tiff during 2018 VMAs. While presenting an award to Minaj, Haddish had reportedly made a joke about the Fifth Harmony.

The joke did not sit well with Minaj who apparently went on to tell Haddish to lay off the girls.

“Don’t be coming for Fifth Harmony because Normani is that bitch!” Nicki had said.

The comment was laughed off at that moment but it seems it had sparked off some tensions between the two which continue to linger.

Fans naturally aren't too happy with Haddish's recent comment and are defending Minaj on social media.

i've never even cracked a smile at a tiffany haddish joke for them to call her the nicki minaj of comedy pic.twitter.com/u12AIXi49u

Comparing Tiffany Haddish to Nicki Minaj is the weirdest thing to me...at least Nicki’s good at what she does pic.twitter.com/rkt2OzwFh3

Tiffany Haddish and her bully gang drove a doctor to self harm and possibly suic*de earlier this year because she fact checked them on spreading misinformation. She also tried to shade Normani on stage. I don't think Miss "i bully because I'm right" should speak on Nicki Minaj pic.twitter.com/C0RxM900zc

Meanwhile, Nicki Minaj is yet to respond to the clubhouse comments but her loyal fan base has called out Haddish.

Haddish recently won her first Grammy on Sunday. Her Black Mitzvah comedy special won the Best Comedy Album and beat veterans like Jerry Seinfeld, Patton Oswalt, and Jim Gaffigan.  Her win is being considered as historic as she is the first Black woman to win the category after Whoopi Goldberg who had won a Grammy in 1988.