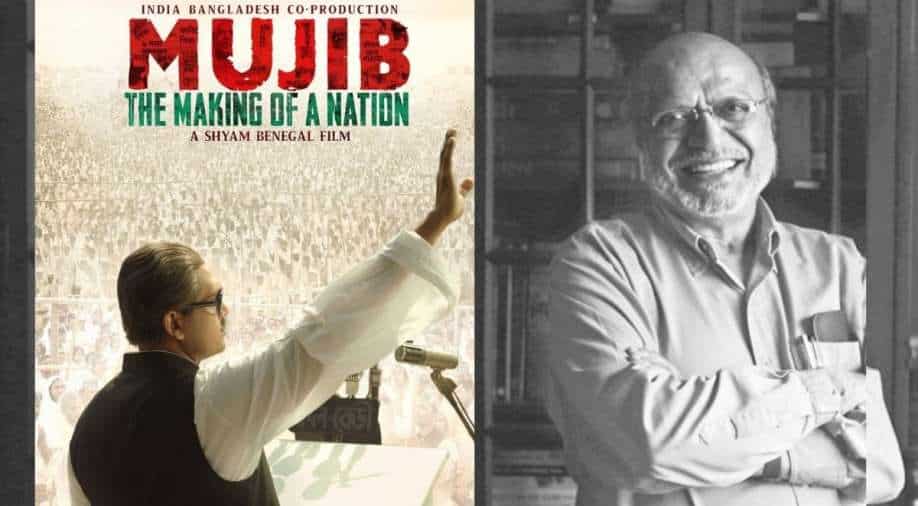 Many netizens slammed Shyam Benegal and the research he did on the project as they shared some factual mistakes.

Veteran director Shyam Benegal has been in the news lately for the trailer of his movie 'Mujib: The Making Of A Nation' which was released during the ongoing 75th Cannes Film Festival.

The 90-second trailer of the movie about Sheikh Mujibur Rahman aka Bangabandhu, the founder of Bangladesh, was launched during the Indian Pavilion at Cannes.

The clip went viral with netizens slamming the work done in the trailer, whether it's VFX, the makeup, or the accent with many suggesting that they should have cast Bangladesh actors.

🎥 Watch the official trailer of 'Mujib – The Making of a Nation' released at the 75th #CannesFilmFestival.

Many netizens slammed Benegal and the research he did on the project as they shared some factual mistakes like the trailer showing different Bangladeshi flags during the Liberation War.

Tbh, the trailer of #Mujib - The Making of a Nation looks promising but the poor VFX in 2022 might make it disappointing. #Bangladesh #bangabandhu

Social media also called out the veteran filmmaker for the amount of money he spent on the movie. As per the reports, the movie, which is backed by the government of both neighbouring counties, has been made on a budget of $10 million (Rs 75 crore).

Now reacting to the criticism, the Indian film director said during an interview with The Telegraph that he didn't understand why people are so upset and how can they make a comment on a movie just after seeing only the trailer.

“You cannot pass a comment on a film by seeing a 90-second trailer. You can comment on just the trailer,” he told The Telegraph, adding that he just got a message that there have been some comments.

just watched the trailer of ‘Mujib - The Making of A Nation’ and lost all my interest to watch the movie in hall. gonna be a generational flop.

During the launch, Banagal who attended the event virtually said, ''This is an Indo-Bangladesh co-production.. first of its kind actually. This is a very important film because I personally think that I got the opportunity to work with some of the best actors of the subcontinent. Sheikh Mujibur was an extraordinary person ..he was a person who had a very middle-class background and lived a simple life but he had a burning ambition that helped him create Bangladesh. It was absolutely marvellous working on the film."

The movie will be released by the end of this year.

This is not the first time when Banegal is facing backlash for his biopic movie. Earlier, he was called out for his movie 'Bose: The Forgotten Hero' based on the life of Netaji Subhas Chandra Bose.