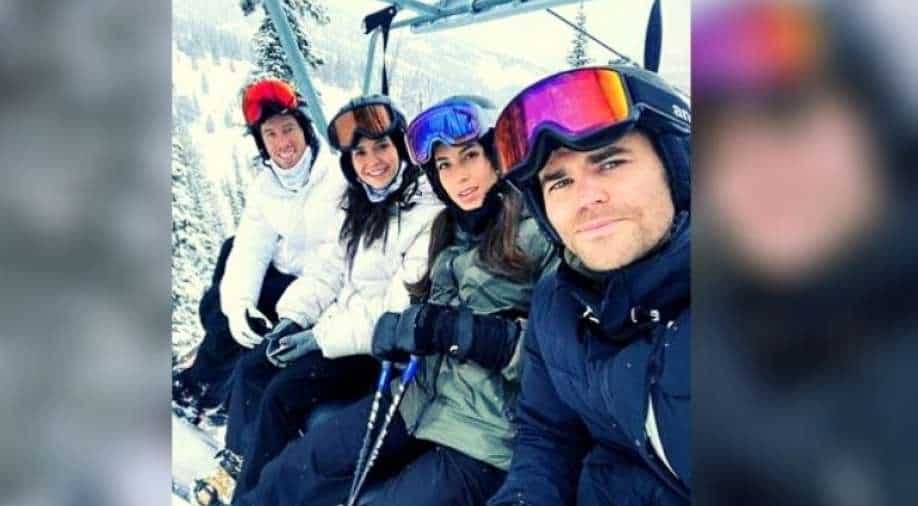 The Vampire Diaries alum hit the slopes in Jackson Hole, Wyoming with White, Wesley, and his wife Ines de Ramon.

Nina Dobrev had a mini 'The Vampire Diaries' reunion up in the mountains as she met Paul Wesley on a ski trip with her boyfriend Shaun White.

The Vampire Diaries alum hit the slopes in Jackson Hole, Wyoming with White, Wesley, and his wife Ines de Ramon.

The actress shared pics of the four of them in their gear and goggles with the caption, "sometimes you gotta double up" alongside a mask emoji.

Paul called it "My kind of Superbowl Sunday" when he shared a gallery of photos and videos of the friends out in the snow. He captured one snap of the quartet on the ski lift, as Nina and Shaun twinned in white puffer jackets.

Ines, who married Wesley in 2019, posted a picture of herself with two ponytails inside the Jackson Hole Mountain Resort, admitting it was her version of "Super Bowl Sunday." Her view overlooked the picturesque mountains near Yellowstone National Park.

A source close to the couple revealed to ET that "Nina Dobrev and Shaun White’s relationship has gotten more serious and they’re still having so much fun together," "They’re both hysterical, active, like to have fun and go on adventures together and can have deep conversations too. Nina is a very open, loving person and is very into Shaun and happy that he’s in her life.", the source added.