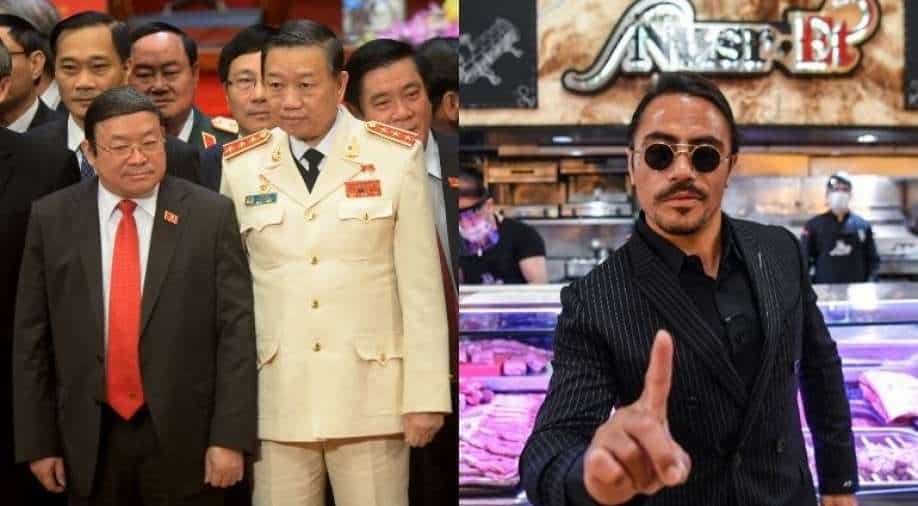 A video showing a powerful Vietnamese official enjoying a bite of steak smothered in gold leaf at a luxury London restaurant has sparked online anger in the Southeast Asian country, where the average person earns a few dollars a day

Meta Platforms has blocked '#saltbae,' a hashtag for celebrity chef Nusret Gokce's nickname after a video was posted online of Gokce feeding a gold-encrusted steak to a senior Vietnamese Communist Party official in London.

The video has sparked online anger in the Southeast Asian country, where the average person earns a few dollars a day.

To Lam, minister of public security, whose agency deals with the monitoring of dissent and surveillance of activists in the authoritarian state, was seen tucking into the hunk of meat at Nusr-Et Steakhouse in the wealthy area of Knightsbridge.

David Beckham, Leonardo DiCaprio, Naomi Campbell, and now the 64-year-old, Lam have been among the visitors to the steakhouse's branches across the world.

The clip of the Vietnamese politician, which was originally posted by the restaurant before being removed, had spread across Tiktok and Facebook in Vietnam.

He was in Britain during a visit by senior Vietnamese officials to the UN climate conference, COP26, in Glasgow.

Also read | No food, no pictures: Wedding photographer deletes all pictures after she is denied breaks

Many of those posting were angry about the decadence on display while the country struggles in the aftermath of a devastating wave of Covid-19 that has cost countless jobs and caused the heaviest contraction in Vietnam's GDP on record.

''We've unblocked this hashtag on Facebook and we're investigating why this happened," a spokesperson for Facebook operator Meta said.

It wasn't immediately clear why the tag had been blocked, and the spokesperson declined to comment on potential reasons.

While it was blocked, a search for the hashtag generated a message saying community standards had been violated.

Last year, Vietnam threatened to shut down Facebook in the country if it did not remove more local political content from its platform.

To Lam is one of the most powerful officials in Vietnam, his ministry containing both Vietnam's police and the agencies tasked with suppressing dissent and investigating corruption.

He had been touted as a potential candidate for state president in January's leadership reshuffle and has in his capacity as security minister worked to arrest Vietnamese officials accused of corruption and overt displays of opulence.