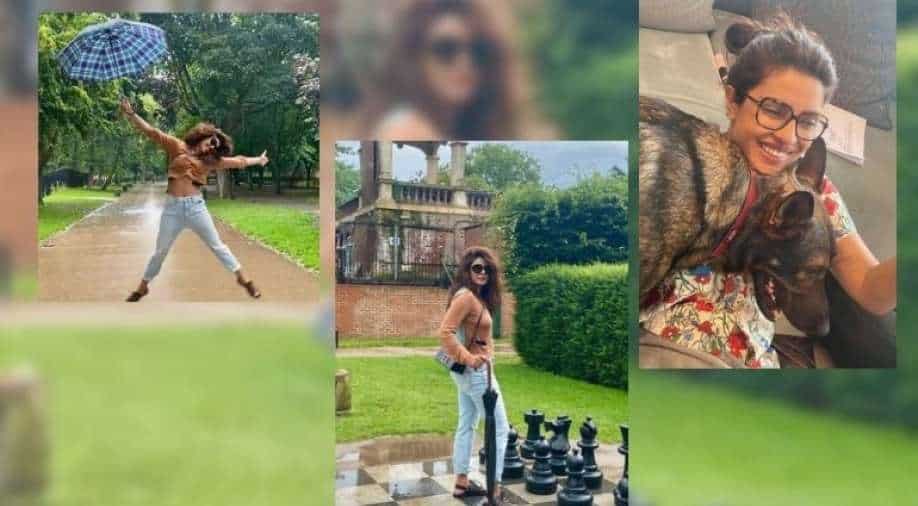 In a bunch of photos, Priyanka Chopra Jonas is looking super cool in denim and a basic top.

Priyanka Chopra Jonas, who was busy shooting for her upcoming show 'Citadel' in London, took some time out to enjoy some summer days in London.

After spending quality time and touring around the picturesque city with her friends and dogs, Chopra later dumped her pictures on her Instagram account.

Sharing the series of pictures, showing Chopra enjoying London summers to the fullest.  In a bunch of photos, the actress is looking super cool in denim and a basic top while she stands and poses on giant chess with an umbrella.

In the other snaps, she is jumping on the streets, eating some hot marshmallows with her friends James Cavanaugh and Divya Jyoti, getting all cuddly up with her pups Gino, Diana and Panda.

In the last, she also posted a picture of her eating a watermelon beside a pool and rowing a boat. Sharing the photos, she wrote, "Photo dump* #londonsummer #inbetweenshots #lastfewdays #3bestfriends #puppylove."

A few days back, away from her family and her husband Nick Jonas, Priyanka had a 'quiet birthday' in London. She took to Instagram to share glimpses of her birthday celebrations and thanked fans and her Nick for making her day special.

Meanwhile, on the work front, Priyanka was recently announced as one of the ambassadors for Victoria`s Secret. Apart from this, she will be next seen in the upcoming spy series `Citadel` also starring Richard Madden of `Game of Thrones' fame. She also has an interesting lineup of films including `Text For You`, `Matrix 4` in the pipeline.