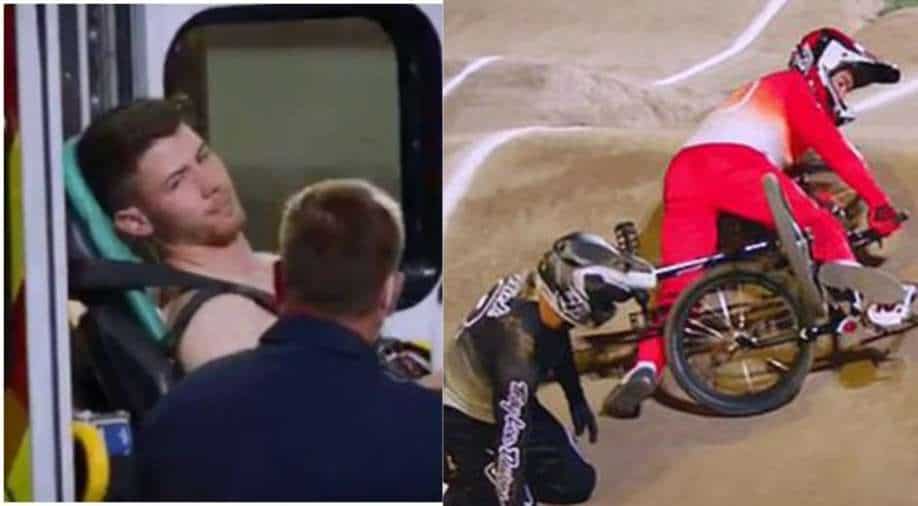 In May, while shooting for 'Olympic Dreams Featuring the Jonas Brothers’, Nick Jonas fell off his bike and collided into his brothers Kevin Jonas and Joe Jonas.

In the month of May this year, Global star Priyanka Chopra Jonas’ musician husband Nick Jonas was involved in an accident that resulted in a fractured rib, bruised tailbone and hospitalization.

In the video, posted by a fan on Twitter, which has now gone viral, Nick can be competing with his elder brothers—Kevin Jonas and Joe Jonas—in Olympic sports including field, gymnastics, and BMX biking.
In the recently released NBC’s ‘Olympic Dreams Featuring the Jonas Brothers’, which was a pre-shot event, Nick’s fall from his bike and the subsequent collision into his brothers’ bikes can be seen. The same video was then posted by a fan that has now gone viral.

Nick can be seen toppling over and hitting the ground in the video. He was then taken to a hospital in an ambulance.

A fan captioned the fall as, “A gif of Nick Jonas falling from his bike and getting a broken rib during the third round of #OlympicDreams.”

📹 A gif of Nick Jonas falling from his bike and getting a broken rib during the third round of #OlympicDreams.

“I think the tape kind of speaks for itself. I always give 110 percent, and sometimes that gets you the gold. In this case, it got me a fractured rib, bruised tailbone, and a hospital dinner. But I'm recovering,” Nick reportedly said about his injury at the end of ‘Olympic Dreams Featuring the Jonas Brothers’.

In May itself, Nick shared an update with his fans on The Voice where he was a coach along with Kelly Clarkson, John Legend, and Blake Shelton throughout Seasons 18 and 20. He had said, “I'm feeling okay. I've been better, but I'm doing all right. (I have a) cracked rib from a spill on a bike, and a few other bumps and bruises. I just want to go ahead and say that, in case I'm not as physically enthusiastic as I usually am.”