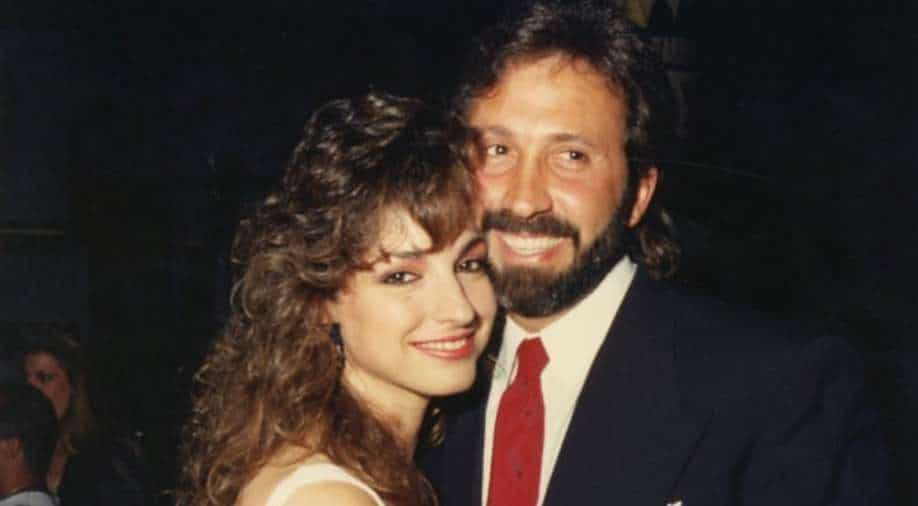 Gloria and Emilio Estefan in their younger days Photograph:( Twitter )

Gloria Estefan's father and grandfather were prisoned in their effort to protect the Cuban people, she claimed. Soon, they realised they had to flee the country they had ever known.

Singer-songwriter Gloria, husband Emilio Estefan and niece Lili have opened up about their respective journeys of fleeing their home country of Cuba when they were mere kids.

On Thursday, in the episode of 'Red Table Talk: The Estefans'--Gloria, Lili and Emily--talked about the ongoing human rights crisis in Cuba and talked in great detail about their own harrowing experiences of fleeing the country when they were children.

"I left Cuba when I was literally two and a half years old. In May of 1960 I was brought to the U.S. because my father was a police officer for the Cuban government. The night of the coup, that Fidel Castro took over power, my father came home and he told my mother, 'We’re in trouble, the president just left the country.' "And she said, 'Don’t go back, they’re going to arrest you,' and he said, 'I have to go back, my job is to protect the Cuban people.'" Gloria said.

Gloria 's father and grandfather were prisoned in their effort to protect the Cuban people, she claimed. Soon, they realised they had to flee the country they had ever known.

"His father, who was a commander in the army, and him were jailed. They let him go about three, four months later and he told my mother, 'I have to get you out of Cuba because this is going to get very bad.' They knew who Fidel Castro was, what was coming, because Castro attached himself to communism. My father left Cuba, he went to the U.S. My mother and I came through Pan Am airlines. I have the roundtrip ticket still," Gloria added.

Gloria's husband, Emilio and his niece, Lili, have similar stories to tell.

"I was born in a place where there’s no freedom of speech -- you are told how to think, what to say, and what to believe. You are taught from a very early age that Fidel is the Commander in Chief...the whole island is like a military base," Lili said.

"I must’ve been 13 and a half, a few months before getting out of Cuba, my mother passed away. She took her life because...desperation. And after that, it was on a Mother’s Day when my father sat me down, I will never forget, 1980, he says, 'Guys, there’s an opportunity for you and your brother to get out of Cuba. Are you guys willing?' How do you make those decisions when you’re 13? That’s one of the biggest problems with the communist regime, they have separated families. And I think this is one of the...why we wanted to tape this show, because we want to do anything to reunite these families again," she went on to add.

Emilio's story is not too different from Gloria's and Lili's. He, too, had to be separated from his immediate family to ensure safetry: for himself and those he loved.

"I was 11 years old when they came to my house looking for dollars because Castro decided to change the money. They looked around and went to the safe. My dad got nervous and couldn't open the safe. They blew out the whole wall and found nothing. That night, I cried all night, and in the morning I told my mother I was leaving. Four years later, I was almost military age, we were leaving because my mom was from Spain. I cried leaving Cuba, but my mom said, 'Don't cry.' One of the hardest things for me, was my grandfather and uncles gave me a photograph and said, 'You will never see me again.' I never saw them again," Emilio said.

"We had no money to speak of. He got in a 20-foot boat! You don’t get in the ocean in a 20-foot boat," Gloria said of Emilio chartering the boat to get his family out of Cuba. "None of them knew what they were doing, what they did was run out of gas. For 10 days they were lost at sea, and all I kept hearing through the news was -- the name of their boat was Popea, but there were other ones -- and they said there’s been a Popea lost at sea. I’m pregnant here, I don’t know what’s happening."

For Emilio, food and water meant nothing in comparison to the lives of his family members.

"You’ll know when you have kids in the future what you’d do for your family. The only thing we do is try to save our family to be in a free country. So we spent six days without eating and hardly drinking any water, and then when I get there, they say, 'The boat is too small, you cannot be able to bring them back,'" Emilio shared.

"The guy came with a list of people that were going to go on your boat and we were on the top and our last names were Estefan, so you are Estefan...who do you think they crossed out? Lili Estefan, Juan Emilio Estefan, and Jose Roman Estefan," Lili explained.

It was six months before Gloria and Emilio could obtain visas that legally allowed them to bring their families to the U.S. It's something Lili is grateful for.

"Thank you both, for you [Gloria] letting him go and you [Emilio] risking your life to save mine, my father’s and my brother’s," Lili said to the couple. "I have worked so hard for you guys to be proud of me. For you to know that it was not in vain."

"Of course it was not in vain!" Gloria exclaimed. "It was the best thing to happen in my life," Emilio concluded.