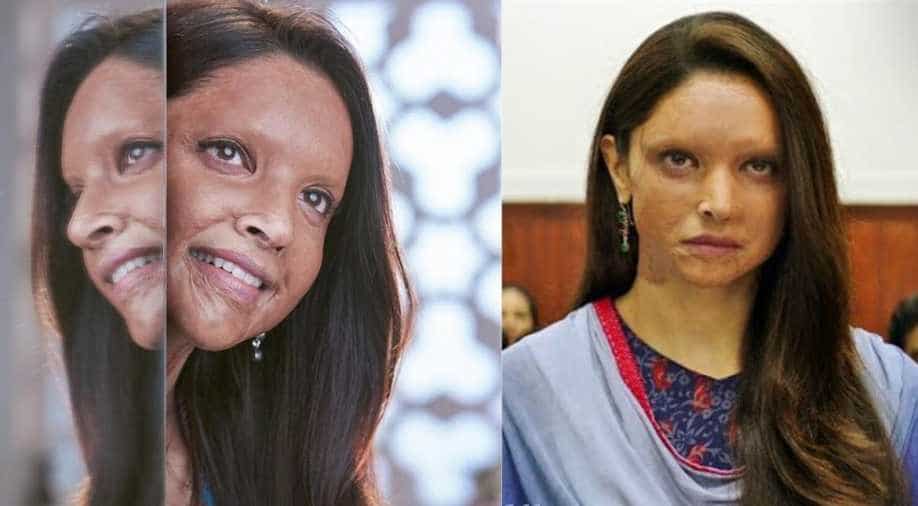 Meghna Gulzar narrates an important story in 'Chhapaak' which has top performances by Deepika Padukone and Vikrant Massey.

How do you humanize something as horrific as an acid attack? How do you depict such a blood-curdling crime on the big screen without making the viewers squirm in their seats? In 'Chhapaak', filmmaker Meghna Gulzar takes on a difficult story based on acid attack survivor Lakshmi Agarwal's life and narrates it effectively that is restraint in its depiction but yet powerful.

The films leading lady - also first time producer- Deepika Padukone takes on the central character of Malti, a 19-year-old starry eyed, shy girl whose life comes to a  standstill after a jealous neighbour throws acid on her. With a non-linear narrative, the film opens with activist Amol(Vikrant Massey) and journalist Alka looking for Malti amid the Nirbhaya protests. Amol- a journalist turned activist, runs an NGO called Chhaya for acid attack survivors in Delhi. Malti eventually lands a job in the NGO and the two develop an uncanny bond. Also see- Deepika, Ranveer dazzle at the red carpet premiere of 'Chhapaak'.

The film has a nonlinear narrative, Malti's story is shown in spurts. How she was before the attack took place, how her life changed, how her family dealt with the incident and how the police nabbed the accused- is told even as Malti and Amol go around helping, rehabilitating acid attack victims.

The film never overdramatizes any of the incidents and presents a story as it is. The only scene that is repeated- and for desired effects- is the one that involves Malti being attacked. That scene is gut-wrenching and will perhaps remain one of the high points of Deepika's career. Meghna Gulzar and Atika Chohan's screenplay never minces words, especially in that scene. It is very raw and you can only imagine the unbearable pain that these victims go through.  It's a crucial scene in the film, and definitely, one that stays with you long after you have left the theatre.

The film also puts women at the forefront. Be it Malti, the victim, who initially is reluctant to fight it out, to her mother who is helpless yet puts up a strong face for her daughter, or the compassionate landlady and the lawyer who give Malti the strength and encouragement to fight back even as they warn her that the road to justice would be a long one. Meghna also uses real acid attack survivors, playing bit roles in the film- thereby making the film look more authentic and attempting to normalise it for even the viewers so that no one grimaces the next time they see some like Malti.

While the film has fierce strong women characters, it also shows some of its men in the most supportive way. The screenplay never lets the focus shift, yet they show men equally contributing to a healthy, normal eco-system. Be it Malti's father, who despite his economic background is willing to fight the system and support her daughter, or the lawyer's supportive husband, who is always ready to step up at home when the wife has to rush to work.

'Chhapaak' also lets the hero- in this case Amol- take a step back when the woman advises him to. He is a do-gooder but still cynical and angsty. He takes his job as the crusader too seriously. In a poignant scene, he scolds Malti for celebrating a new law being passed in favour of acid attack victims. He reminds her that her case is still pending and there's really nothing to celebrate. Malti quietly reminds him that it's she who has been a victim of the heinous crime, not him. So the right to be angry or happy remains with her, not him. Later he seeks permission to go with her for her court hearing, says, he wants to see the face of the man of the attacker and Malti again reminds him that he won't gain anything seeing his face.

Such little moments make 'Chhapaak' very humane and relatable strangely. Its a journey of a girl who learns how to stand up for herself after being knocked down.

The casting is on point. The film belongs to Deepika Padukone. She dominates every scene and she delivers. It's not easy to play a character and go through emotions that you have never experienced yourself- but Deepika plays its beautifully, highlighting not just Malti's strength but also her inner beauty which draws people to her.

Vikrant Massey again proves that he is a master of his craft and even though his screen time is limited, he delivers a very earnest performance as Amol, a man who takes himself too seriously even though everyone around him tells him otherwise.

Madhurjeet Sarghi as Malti's lawyer also delivers a commendable performance as the lawyer who never gives up.

The film though isn't devoid of flaws. In an attempt to normalise Malti and likes of her, it sometimes oversimplifies certain aspects of her life. Her progression from a victim to someone who fights back seems almost like a cakewalk. They keep talking about the financial problems that Maltii and her family faces but how eventually money is generated is not very clearly shown. The second half also seems to stretch a bit and almost pans about like docu-feature.

'Chhapaak' ultimately triumphs, despite these flaws. It deals with a subject that no one in Bollywood has ever spoken about. It not only educates us about the archaic laws and highlights the need for its immediate change but also normalises the entire issue at hand by showing these survivors as someone like us-  in need for jobs, having desires, having aspirations to do things just like everyone else without constantly being stared at. 'Chhapaak' highlights the grit of scores of women like Malti who want to be accepted in a society that tries to look away ever so often.