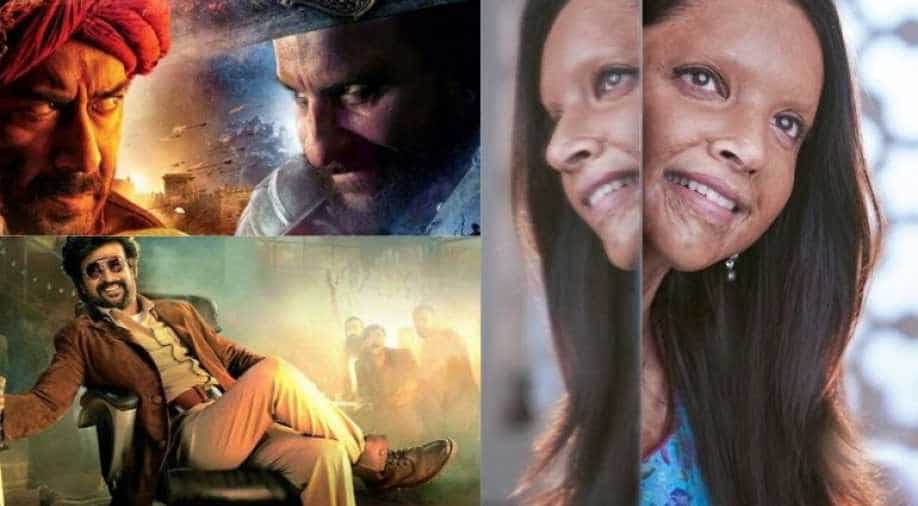 Superstar Rajinikanth's 'Darbar' will also hit the big screens on the same day alongside the other two Bollywood films.

Two of the much-anticipated movies 'Chhapaak' and 'Tanhaji: The Unsung Warrior' are set to clash at the box office with both having a release date of January 10, 2020.

Deepika Padukone starrer 'Chhapaak' has been making the right noise among the moviegoers ever since its trailer was dropped a week ago. 'Tanhaji: The Unsung Warrior', featuring real-life couple Ajay Devgn and Kajol was no less in creating a buzz with its action-packed trailer.

Film critic and trade analyst, Taran Adarsh, confirmed the news of the clash between the movies on his official Twitter handle."Clash CONFIRMED: #Tanhaji: #TheUnsungWarrior versus #Chhapaak versus #Darbar [#Hindi]... #AjayDevgn, #Kajol, #SaifAliKhan versus #DeepikaPadukone versus #Rajinikanth", the tweet read.

Superstar Rajinikanth's 'Darbar' will also hit the big screens on the same day alongside the other two Bollywood films. 'Chhapaak' is based on the life of acid attack survivor Laxmi who was attacked allegedly by a spurned lover in 2005 at the age of 15.

While 'Tanhaji: The Unsung Warrior' is a biographical drama set in the 17th century, based on the life of legendary Tanaji Malusare, who fought alongside Chatrapati Shivaji against the Mughals.