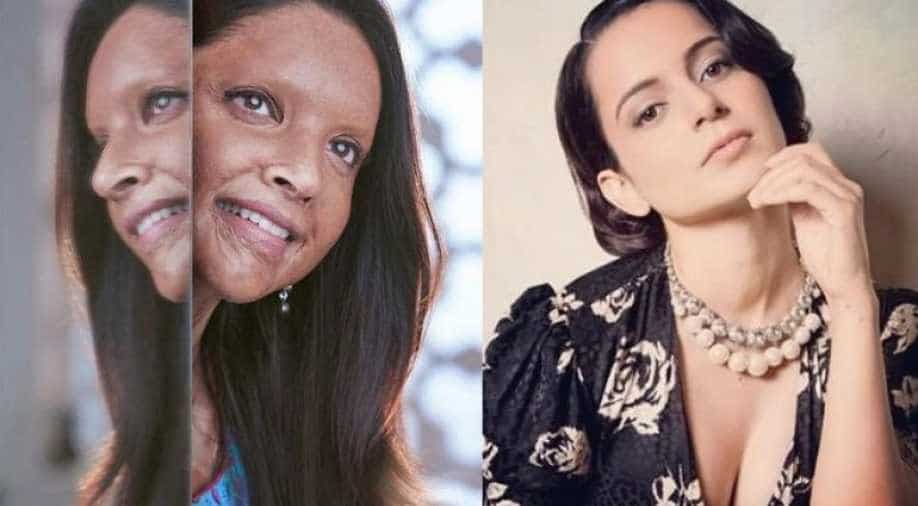 Chhapaak' is being helmed by Meghna Gulzar and is set to hit theatres on January 10, 2020.

Actor Kangana Ranaut on Wednesday applauded director Meghna Gulzar and actor Deepika Padukone for making 'Chhapaak', a film based on acid-attack victims. Kangana's sister Rangoli Chandel who herself is an acid-attack survivor took to Twitter to share a video of the actor where she is seen extending thanks to Gulzar and Padukone for making a film on the important issue. Also read: Deepika Padukone joins JNU students protest

"I saw the trailer of the film 'Chhapaak' recently, and after watching it I was reminded of the incident of acid attack on my sister Rangoli. Today, I and my family thank Meghna Gulzar and Deepika that they made a film on this issue. This will give courage to those people who gave up on their life after struggling with it," said Ranaut in the video."

This film has placed a tight slap on the face of those monsters who succeeded in their act but not in their will. With this film, all those faces will glow that has been spoiled and their courage was broken by these monsters and the beauty of their spirit," the 'Panga' actor said.

The pain still lingers. Our family thanks team #chhapaak for a story that needs to be told! @deepikapadukone @meghnagulzar ⁦@foxstarhindi⁩ pic.twitter.com/drKN3i6GSP

Congratulating the team of the film, Kangana added, "I wish that with this New Year the sale of acid gets prohibited so that this country becomes free of acid-attacks. In the end many many congratulations to the team 'Chhapaak'."The movie is based on the real-life acid attack survivor of Laxmi, who at the age of 15, was attacked allegedly by a spurned lover in 2005.

Laxmi had to undergo several surgeries. Later, she took up the job of helping acid attack survivors and promoted campaigns to stop such attacks.

'Chhapaak' is being helmed by Meghna Gulzar and is being co-produced by Deepika and Fox Star Studios. The movie is set to hit theatres on January 10, 2020