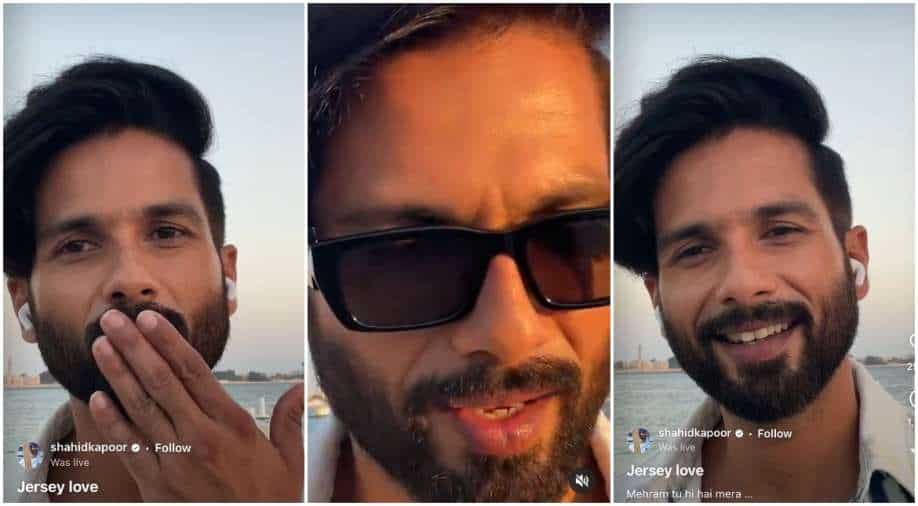 Shahid Kapoor sang a song from 'Jersey' that is yet to release! Photograph:( Instagram )

During the heart-to-heart chat with his fans for the love they have shown to the trailer of his film, Shahid Kapoor revealed that he had gotten injured while shooting 'Jersey' and had to endure 25 stitches on his body.

Our Sunday's made with this piece of social media delight!

In a rare move, Bollywood megastar Shahid Kapoor conducted a live Instagram session to express his love, joy and gratitude over their reaction to the trailer launch of his upcoming sports saga, 'Jersey'.

During the session, the actor answered a plethora of questions about his work as well as personal life.

However, what took everyone by surprise was him singing a soft, love ballad from his upcoming film ‘Jersey’ even before its release. Titled 'Mehram Tu Hi Hain Mera', Shahid sang the first few lines for his fans and seemed to be in a romantic mood.

A fan had requested him to sing a song and Shahid decided to go ahead with 'Mehram Tu Hi Hain Mera'. After singing the song, a coy Shahid said, "I have released the song before the song has even been released! Sachet and Parampara, please don't kill me for this! But I love this song so I had to sing it!"

During the heart-to-heart chat, Shahid Kapoor also revealed that he had gotten injured while shooting 'Jersey' and had to endure 25 stitches on his body.

“I busted my lip on this film. My strongest memory of Jersey will be that I felt that I will never look the same again. (The ball) busted my lower lip and we actually had to stop shooting for two months because of that. I had to get some 25 stitches. It actually took three months for my lip to feel normal -- it still doesn't feel normal. There's a part on my lip (giving fans a close look at it) which I feel like its dead. I can't move it. So I've given my blood to this film,” he said.

Shahid Kapoor’s 'Jersey' is all set to release on December 31.