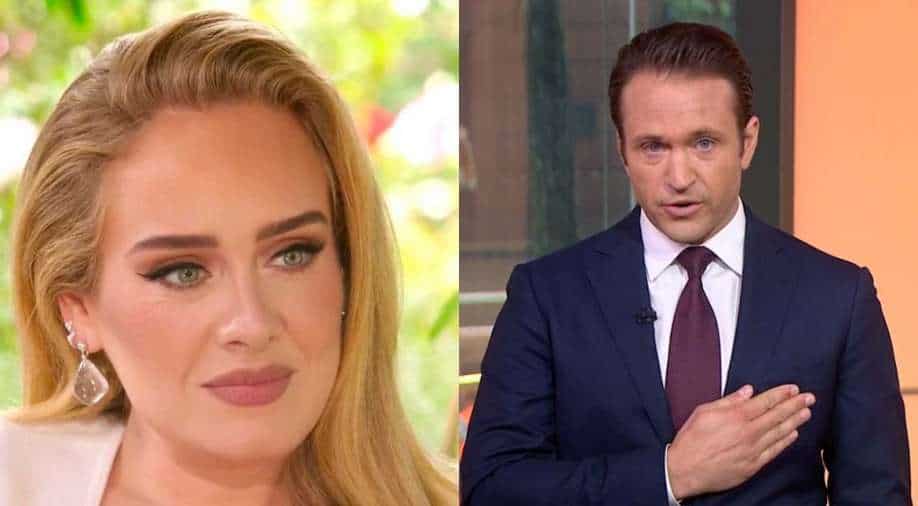 Adele and Matt Doran spoke for 29 minutes, he says, but the interview was never broadcast Photograph:( Instagram )

On November 27, Matt Doran revealed in his long video-taped apology that a day after reaching London for the interview, he was sent the link to Adele's complete album that he missed, thus leaving him under-prepared for the interview.

Australian TV reporter, Matt Doran, who has received flak in the past few days for not listening to Adele's album before his scheduled interview with her in London, has now issued a lengthy apology to Adele on air for 'insulting' her.

The interview, owing to the major fiasco Doran had committed, was never never broadcast.

On November 27, Matt Doran revealed in his long video-taped apology that a day after reaching London for the interview, he was sent the link to Adele's complete album that he missed, thus leaving him under-prepared for the interview.

"This is a story that has sparked a torrent of abuse and mockery from around the world and, if I'm being honest with you, the bulk of this savaging, I deserve and I totally own. I flew to London to interview Adele, an unspeakable privilege and what was to be one of the highlights of my career," Doran said on Morning Sunrise, the channel he works for.

He continued, "I made the terrible mistake of assuming we weren't to be given a preview copy of this album because our interview was airing before it was released and Adele's album was the industry's most prized secret. The day after, after we landed in London, an email came through from Sony. It didn't mention Adele but it did contain a link to her album. The genuine, dead-set, hand-on-heart truth is that I missed it, by an absurdly long margin, the most important email I've ever missed in my life."

Adele is yet to respond to Doran's apology or even the reports that their interview had gone south following the revelation that the interviewer had only listened to 'Easy On Me' and not the entire album.

Doran explained that there was no walkout during their chat. "The interview itself, Adele didn't walk out. It ran overtime."

During the interview, they "spoke of the paradox that is being the world's most famous artist but hating fame. We also discussed, at length, the concept of pure artistry, the majesty of Adele's voice, what it must be like to hear that sound come out of one's own mouth!"

He also said that he learned that "How 'Go Easy on Me' was conceived in part by singing acapella in the shower." Doran said that the interview went on for 29 minutes and called Adele profound, funny, raw and honest during that time frame.

"But all that doesn't matter. Because by missing the album link, however I might try to justify it, I've insulted Adele. To Adele, I say, I'd never have knowingly disrespected you by deliberately not listening to your work. I am so sorry. I also apologize to Adele's Australian fans, and to you, our viewers, who through my error, have been denied this interview and the insight into her character," he said.

Doran then quoted a lyric from one of Adele's song, saying, "Sometimes forgiveness is easiest in secret."
"I'm not expecting that forgiveness. But I do owe you an apology. Thank you so much for joining us this morning here at Weekend Sunrise. That's all for today. We'll see you tomorrow," the host concluded.