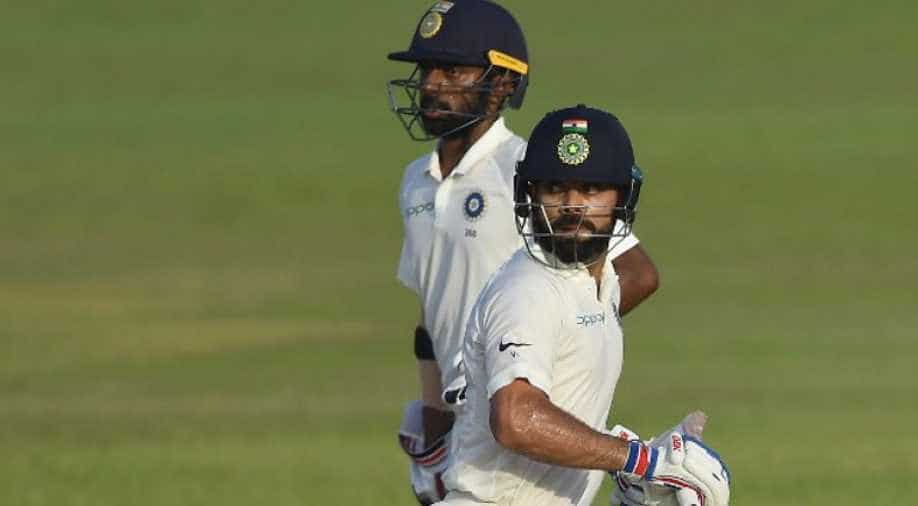 Indian skipper led from the front against Sri Lanka on Day-3 of the Galle Test Photograph:( AFP )

Indian opener Abhinav Mukund and skipper Virat Kohli blitzed Sri Lanka post-tea as the visitors charged ahead to take a massive 498-run lead in the first Test match against Sri Lanka at Galle on Friday.

The Lankan bowlers were left clueless as Mukund who failed to get going in the first innings hit back with a defiant 81 in just 116 balls with eight boundaries. Skipper Virat Kohli gave his opener able company at the other and remained unbeaten on 76(5 boundaries) as India took a stranglehold of the second Test.

Earlier on Day-3, Sri Lankan batsmen were left clueless against Indian spinners and fast bowlers as the hosts were bowled out for 291 in reply to India's first innings score of 600.

Sri Lanka's Angelo Mathews and Dilruwan Perera offered stiff resistance to India but the other Lankan batsmen failed to read Indian bowlers as the Sri Lankan innings folded in less than a day.

Mathews hit a confident 83 in 130 balls studded with eleven boundaries and a six but fell in the 59th over off Jadeja's bowling as India kept the visitors on the mat on Day-3.

Virat Kohli did not enforce the follow-on as Sri Lanka were bowled out for 291 in the first innings at Galle. (AFP)

Opener Upul Tharanga was instrumental in giving Sri Lanka a good head start after the fall of Karunaratne wicket in the second over, the Lankan opener hit 64 in just 93 balls with ten hits to the fence but was run out by Mukund.

Mathews and Perera held the innings together but after they fell the Lankan innings failed to offer any resistance to the Indian bowlers. Perera's invaluable 92 in 132 balls with ten boundaries and four sixes was the highlight of the Lankan innings. The Lankan lower order batsmen ran out of partners in the end as Virat Kohli kept attacking the Lankan batsmen.

The Lankan batting was hampered by five batsmen who failed to reach double figures - Karunaratne(2), Mendis(0), wicketkeeper Dickwella(8), captain Herath(9), Kumara(2)- failed against the Indian bowlers led by  Jadeja and Shami who picked up five wickets between them.

Jadeja was the standout bowler picking up 3 vital wickets and Shami picked up Gunathilaka & Mendis as Sri Lanka managed to score just 291 falling short of a mammoth 309 runs to India's first innings score of 600.

PSL 6: Complete schedule, venue details and all you need to know