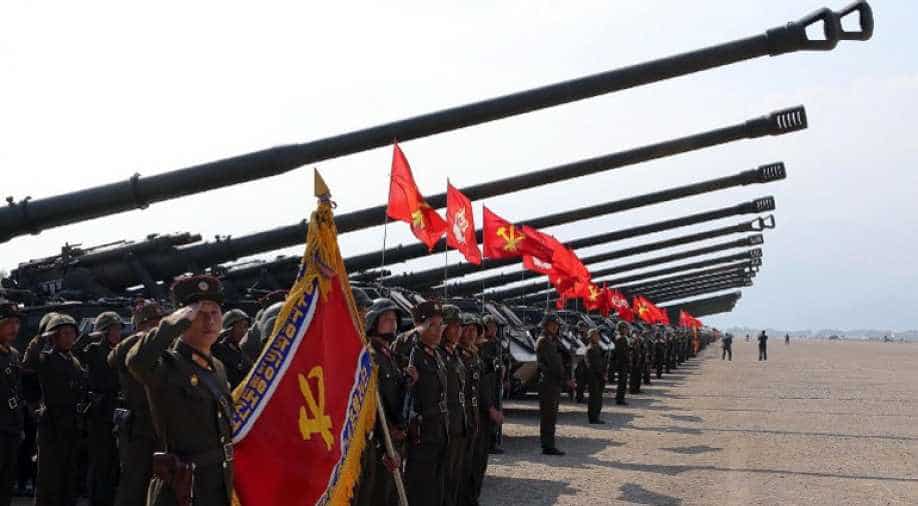 North Korea has said it is "fully ready to respond to any option taken by the US". Photograph:( AFP )

Two days after North Korea unsuccessfully test-fired a ballistic missile in defiance of pressure by the West, a spokesman for the North's foreign ministry said Pyongyang was "fully ready to respond to any option taken by the US".

The regime will continue bolstering its "pre-emptive nuclear attack" capabilities unless Washington scrapped its hostile policies, the spokesman said in a statement carried by the state-run KCNA news agency.

The move comes even as US seemed to be softening its stand on North Korea after weeks of war rhetoric after US President Donald Trump offered some backhanded praise for North Korean leader Kim Jong-Un, calling him "a pretty smart cookie" in a television interview that aired Sunday.

Trump said he had "no idea" whether Kim was sane or not, but said the North Korean leader had faced a formidable challenge in taking over the country at a reported age of 27 after his father's death in 2011.

"He's dealing with obviously very tough people, in particular, the generals and others. And at a very young age, he was able to assume power," Trump said in the interview with CBS's "Face the Nation."

However, North Korea hit back on Monday, declaring, "The DPRK's measures for bolstering the nuclear force to the maximum will be taken in a consecutive and successive way at any moment and any place decided by its supreme leadership," apparently referring to a sixth nuclear test and using the North's official name, the Democratic Republic of Korea.

The Korean peninsula has seen military drills being carried out by the US and South Korea in a bid to keep the pressure on the Kim government. South Korea and the United States wrapped up their annual large-scale military drills on Sunday but continued a separate joint naval exercise that has triggered dire threats from nuclear-armed North Korea.

A French warfare ship arrived in Japan on Saturday ahead of the first joint exercise among Japan, France, the US and the UK.

The amphibious assault ship arrived at the Sasebo naval base in south-western Japan to conduct military drills from May 3 through May 22 in the waters surrounding Japan as well as the Pacific islands of Guam and Northern Marianas, according to Japan's Self-Defence Forces.

As many as 700 military personnel are expected to take part in the Jeanne d'Arc mission for young officers, also to be joined by French frigate Courbet.

Some 60 British sailors and 220 Japanese military personnel will go on board the French vessels, along with their American counterparts.