Watch: Video shows Trump lying, admits he has a 'relationship' with Vladimir Putin 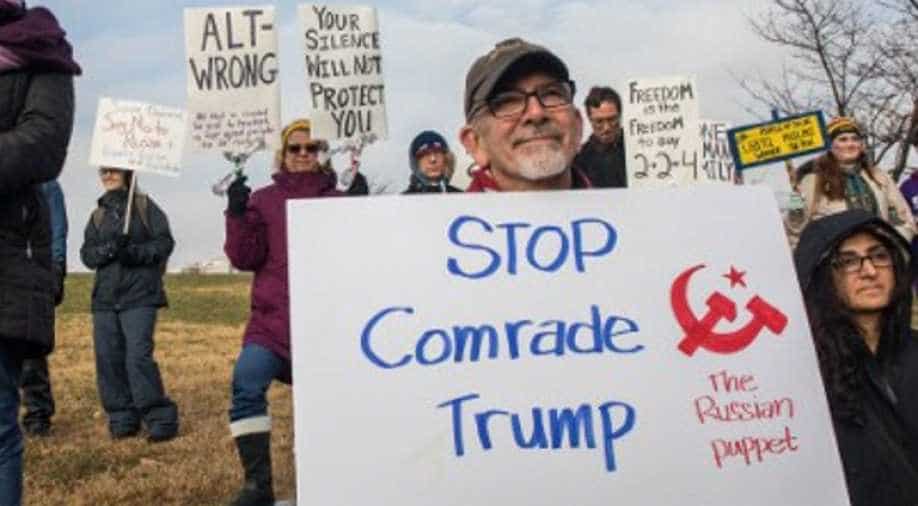 Activists hold signs during a demonstration hosted by #TURNOUT at the Sylvan Theatre near The Washington Monument in Washington, DC, December 17, 2016. Photograph:( AFP )

Throughout the 2016 US election, Donald Trump has fawned over Vladimir Putin, but has repeatedly denied knowing him personally. But in 2013, Trump was filmed admitting that he does "have a relationship" with Vladimir Putin

Trump caught in a HUGE lie on his relationship with Putin.

Donald Trump has brazenly refused to release his tax returns, falsely saying that an audit he was under prevented him from doing so. Then his son Donald Trump Jr, an official Trump Team member, gave the real reason--that releasing his tax returns would subject them to public scrutiny.

Trump is the first presidential candidate in about 40 years to refuse this basic step towards transparency. Trump has also refused to divest himself from his private businesses before taking on the role of President, saying the business will be kept in the family--that is, it will be run by his children, who have already sat in on official meetings with national leaders and global tech giants.

The prospect of Trump being hopelessly enmeshed in a series of conflict of interests, and even the fear that his presidency will be unconstitutional from his first day in office, are all too real fears. But because of Trump's secrecy and because this is all so unprecedented, it's hard to sort it out precisely.

But the fears grow each time more public revelations link Trump, and the people in his administration, to Russia.

Today it was reported that Trump's selection for Secretary of State, Rex Tillerson, was once the director of a US-Russian oil company, and personally received rewards from Vladimir Putin. The Guardian reports that Tillerson is "close" to Igor Sechin, a hardliner ex-KGB member who heads Russia's state oil company, Rosneft. Tillerson also has no political experience whatsoever.

Two major US intelligence agencies and the White House have stated explicitly that they believe Russian hackers intervened in the US election in order to favour Trump, and that this was personally approved by Vladmir Putin.

Paul Manafort, a former Trump campaign manager, quit during the election after evidence emerged that he lobbied for pro-Russian Ukrainian leader Viktor Yanukovych. Manafort initially denied the charge, which he called political propaganda. Other reports claim Manafort funnelled money so pro-Russian interests could secret lobby Washington without making their influence known. NBC reported in August that Manafort was a key player in multi-million dollar business deals between Russian and Ukrainian oligarchs, one of them for a close Putin ally with alleged ties to organised crime.

Donald Trump's son Donald Jr-- who has no experience in politics but was reportedly seeking White House security clearance--told a real estate conference in 2008, "Russians make up a pretty disproportionate cross-section of a lot of our assets...We see a lot of money pouring in from Russia". The Washington Post published this quote, attributing it to an account of the conference published on the website of a trade publication, eTurboNews.

While the FBI and CIA are investigating the links between Donald Trump and Russia, the Electoral College will not be briefed by these American intelligence agencies before voting on whether or not to make Trump the president Monday.

There will be information connecting Trump to Russia that they, and we, do not know.

US Democrats say spy agencies must update approach to China