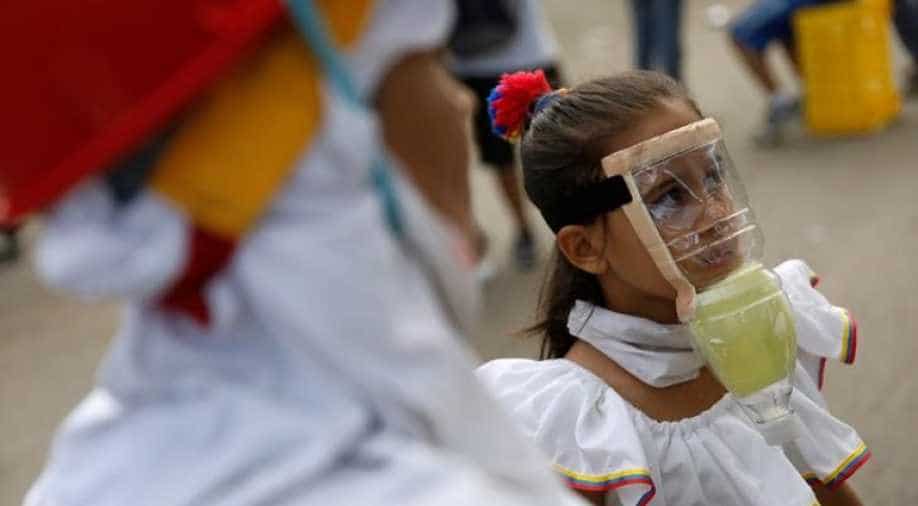 A girls wears a homemade gas mask during a rally against President Nicolas Maduro in Caracas, Venezuela, May 27, 2017. Photograph:( Reuters )

Courier services have told customers that the Venezuelan customs authority has banned them from importing items such as gas masks, slingshots and bulletproof vests used by some demonstrators in anti-government protests.

Other prohibited items include first aid supplies such as burn cream and gauze, according to emailed messages sent to clients this week by the package delivery companies. These goods have been used to treat injured protestors.

Another company, BVA Export, told clients in an email, "It is not allowed to send gas masks and items that can be used for defense and/or attack in the Venezuelan protests." It included a detailed list of the products that it said had been banned.

There was no immediate response by the companies to requests for comment.

Referring to unidentified courier services, Jose Cabello, head of Venezuela's tax and customs agency Seniat, said in a statement early this week that, "(The opposition) will not use the ports of our country as a bridge to arm their terrorist groups."

The Seniat and the Information Ministry on Saturday did not immediately respond to requests for comment on the courier services' notifications of the banned imports.

President Nicolas Maduro calls the protests a violent effort to overthrow his government, and he insists the country victim of an "economic war" led by adversaries with the help of Washington.

The demonstrations have killed at least 58 people so far. Protesters routinely spend hours in clashes with National Guard troops and police, who disperse them and break up improvised barricades with a combination of tear gas, rubber bullets and armored vehicles.

Most protesters do not have gas masks and instead seek to abate the effects of tear gas with improvised solutions such as rubbing anti-acid liquid on their faces.

Courier services are primarily used by Venezuelans to buy goods such as food and medicine that are not available due to the chronic product shortages that now characterise the OPEC nation's once-prosperous economy.

Members of Venezuela's growing diaspora in countries such as the United States and Panama also use courier services to ship supplies to family back home.