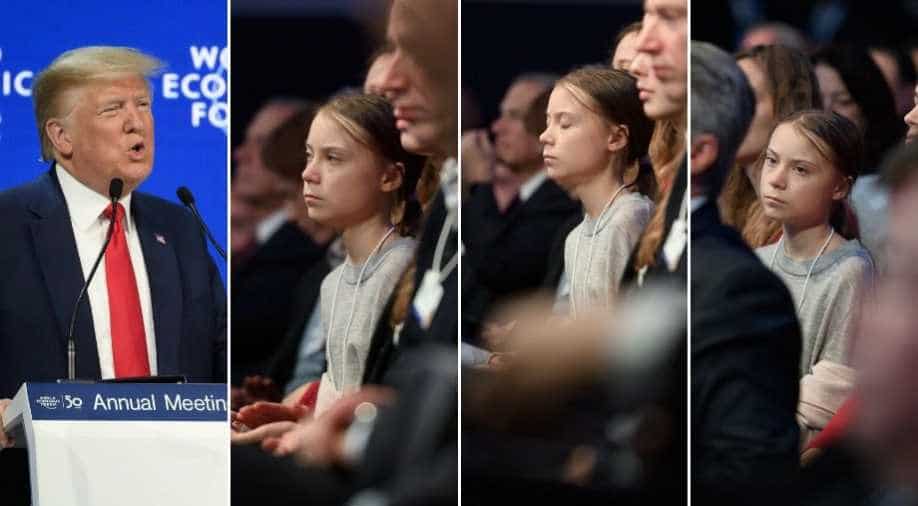 In a veiled attack on Thunberg, Trump said, 'We must reject the perennial prophets of doom and their predictions of the apocalypse.'

As world leaders gathered at Switzerland for World Economic Forum, veiled attacks and glares were exchanged between US President Donald Trump and teenage climate activist Greta Thunberg on Tuesday.

A picture from the event is doing rounds on social media in which Greta Thunberg is seen looking less than impressed as she listened to Trump's keynote address at Davos.

In a veiled attack on Thunberg, Trump said, "We must reject the perennial prophets of doom and their predictions of the apocalypse."

"They want to see us do badly," Trump added.

He also claimed that "alarmists" had been wrong on previous occasions by predicting population crisis, mass starvation and the end of oil.

Trump further branded those warning of out-of-control global warming and other environmental disasters "the heirs of yesterday's foolish fortune tellers".

Meanwhile, Thunberg in her speech said, "You say children shouldn't worry... don't be so pessimistic and then, nothing, silence," while referring to "empty words and promises" by world leaders on climate change.

"Our house is still on fire," Thunberg said, adding, "Your inaction is fuelling the flames."

In a rebuke to Trump's pledge to plant more trees, Thunberg said that planting trees is not enough.

During the speech, Trump announced that the US would join an existing initiative to plant one trillion trees, but also spoke at length about the economic importance of oil and gas while Thunberg called for an immediate end to fossil fuel investments in front of a packed audience.

Last year, a clip of the teenage activist giving Trump an ice-cold glare went viral after she told the United Nations that the leaders of the generations before hers had stolen her childhood and her dreams.