'US will show its strength at the UN', warns newly-appointed envoy Nikki Haley 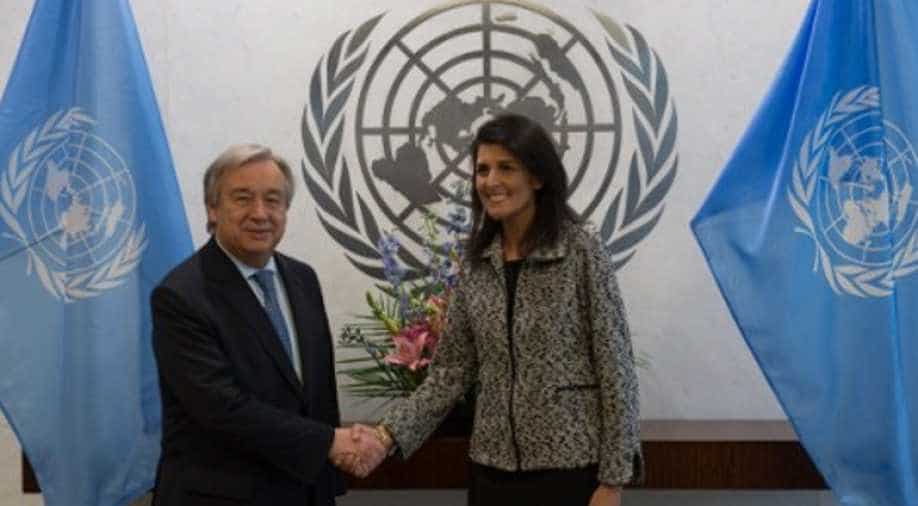 Haley, accompanied by other senior officials, presented her credentials to Guterres on the first day she took charge as Washington's envoy to the United Nations. Photograph:( AFP )

In a strong message, the new US Ambassador to the UN, Nikki Haley, today said her country will show its "strength" at the world body and act accordingly against opponents.

"We will have the backs of our allies...And those who do not have our back, we're taking names," Haley, who arrived here to present her credentials to UN Secretary General Antonio Guterres, said in her brief remarks to the press.

South Carolina's Indian-American former Governor, Haley said it will not be business as usual and "US will show its strength" and voice at the UN.

Haley, accompanied by other senior officials, presented her credentials to Guterres on the first day she took charge as Washington's envoy to the United Nations.

Haley, 45, was sworn-in as America's Ambassador to the United Nations on Wednesday, scripting history to become the first from the influential Indian-American community to serve on a Cabinet rank position in any US presidential administration.

Once a fierce critic of Trump, Haley in November was selected as the first woman and first minority to serve in the Trump Administration.

She is the daughter of Indian immigrants from Punjab.