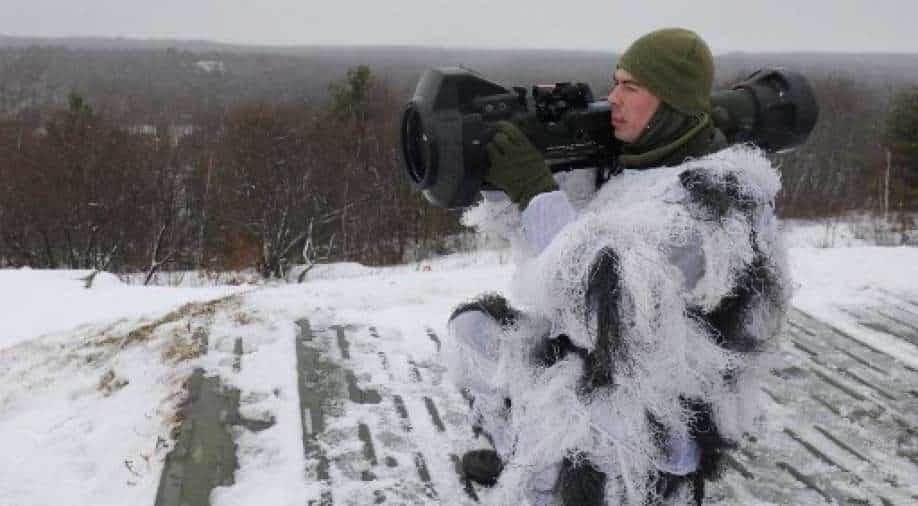 A Ukrainian serviceman aims an anti-tank weapon near city of Lviv Photograph:( AFP )

US defence secretary Lloyd Austin said there was still 'space for diplomacy' with Russia over the Ukraine situation while adding that 'conflict is not inevitable'.

Amid tensions with Russia, US President Joe Biden said he would be moving a small number of troops to eastern Europe even as top US general Mark Miley said the consequences of going to war with Russia would be "horrific" for both sides.

However, Ukraine President  Volodymyr Zelensky urged leaders to stop "panic" over Russian deployment along its border. President Biden said he would be sending a small number of troops "not too many" after NATO declared it was ready to deploy 8,500 troops at short notice.

US Joint chiefs chairman General Mark Milley, however, warned of consequences adding that a conflict over Ukraine would lead to a "significant amount of casualties" and it would be "horrific" and "terrible".

US defence secretary Lloyd Austin said there was still "space for diplomacy" while adding that "conflict is not inevitable".

Watch: Has Putin overplayed his hand?

"Mr Putin can do the right thing as well," Austin said, adding, "There is no reason that this situation has to devolve into conflict. He can choose to de-escalate. He can order his troops away."

Russia had submitted a security document to the US and NATO urging them not to induct former Soviet countries into its military alliance referring to Ukraine. The demand was however rejected by the United States.

Also Read in Pics| Russia's 'checkmate': Why the Orion combat drone is a gamechanger

In a phone call to French President Macron, Putin said Russia's "fundamental" concerns were not met as the Kremlin added that Western countries had overlooked the "key question" while informing that it would study the response and then "decide on further actions."

Tensions over Russian troop deployment has peaked after the White House warned that Russia is ready to invade Ukraine between mid-January to mid-February. However, in the phone call to Macron, Putin said Russia has "no offensive plans" on Ukraine.