US election 2020: Siberian bear and tiger predict the next president 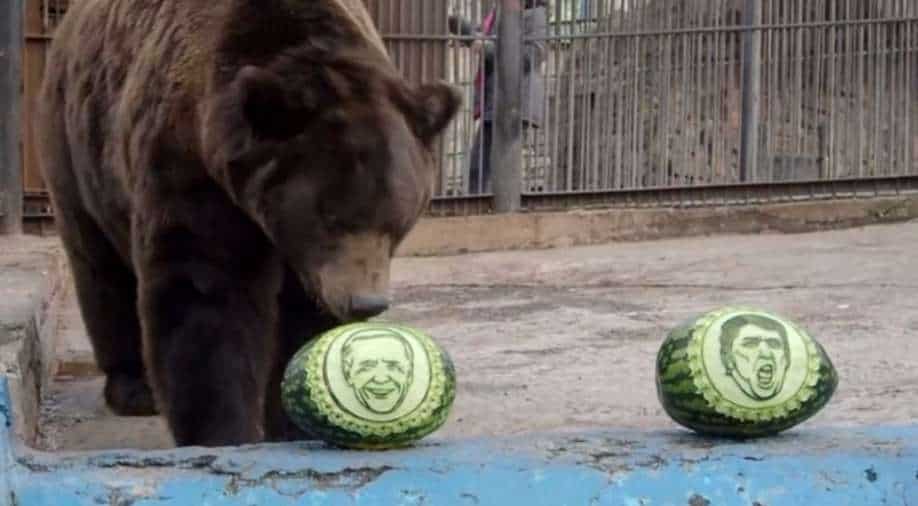 Buyan, a male brown bear kept in a Siberian zoo, has predicted Joe Biden's victory over Donald Trump in the US election

With President Donald Trump and his Democratic rival, Joe Biden locked in a dead heat on the eve of presidential election 2020, the market of US election predictions is filled with forecasts.

Now, a Siberian bear and a tiger prediction have made their prediction on the winner of the US Election on November 3.

Buyan, a male brown bear kept in a Siberian zoo, has predicted Joe Biden's victory over Donald Trump in the US election.

Buyan carefully examined two watermelons portraying American presidential candidates laid out in his enclosure in the Royev Ruchey zoo in the Siberian city of Krasnoyarsk.

After a moment's hesitation, the bear picked Biden and eagerly sank his teeth into the watermelon with his image.

Two other animal experts in Roev Ruchey sided with an opposing party.

Bartek, an Amur tiger set his expectations on Trump immediately, while Khan, a white Bengal tiger, took some time playing around with the image of Biden before finally rolling the Trump's watermelon away.

Royev Ruchey zoo Director, Andrei Gorban said the position of Donald Trump was more confident in the eyes of the zoo dwellers ahead of his previous presidential race.

Also read| US Elections 2020: Where are the Octopuses?

"During the previous Trump's elections race, despite the losing position in which the American president has been, all our animals guessed it right. Of course, Trump didn't call back and didn't say thank you, we weren't very mad, but of course, he cannot count on such support from us as before," he commented.

Oracle Bear Buyan had predicted the victory of Donald Trump in 2016. He was also one of a menagerie of animals in host country Russia that has predicted the outcome of World Cup games.

Previously, another animal, an octopus called Ollie the Octopus had made predictions for the American election.

The Octopus, who swam happily in Anglesey Zoo in the UK, had knocked down the jar with Hillary Clinton's photo on it. As a result, she lost the election in 2016.