US election 2020: Honking gets a new meaning in American politics 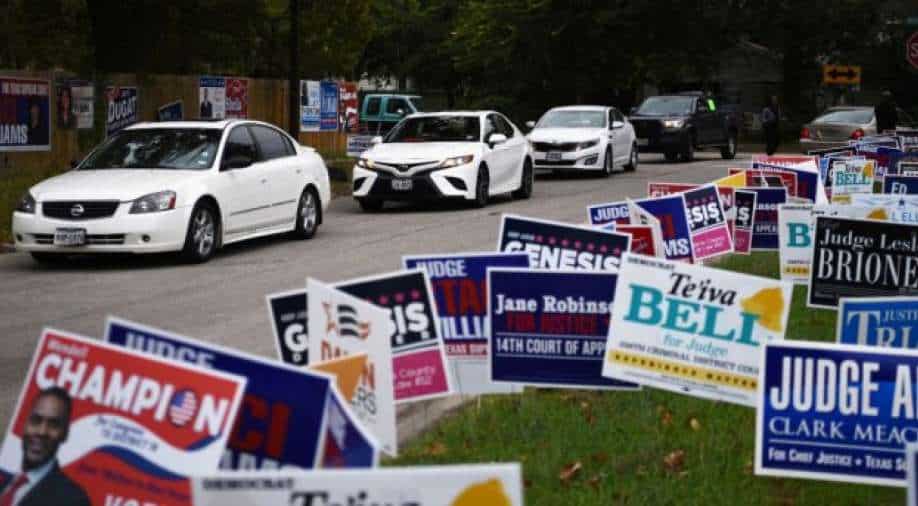 A line of cars drive in for an event encouraging community members to vote in the upcoming presidential election at an early voting site in Houston, Texas. Photograph:( Reuters )

Both Biden, 77, and Harris, 56, ask their supporters sitting in their cars to honk to express their sentiments.

Honking has got a new meaning in the US politics with the annoying sound replacing clapping, cheers and even boos in election campaigns, in particularly the drive-in car rallies of Democratic presidential candidate Joe Biden and his running mate Kamala Harris.

Drive-in car rallies have become a signature election event of the Democratic Party which has taken the innovative path wherein a select group of supporters gather in a parking lot to be addressed by the party’s top leadership as part of its efforts to maintain social distancing due to the coronavirus.

Both Biden, 77, and Harris, 56, ask their supporters sitting in their cars to honk to express their sentiments.

In the election rallies of Republican incumbent President Donald Trump, thousands of his supporters cheer, clap and chant slogans like “We Love You” and “Four More Years.”

Most of these drive-in car rallies are very selective in nature and they are not publicised. In their rallies, it’s all honking.

The level of honking reflects the sentiments, happiness and anger of their supporters.

It was once in a while that some of the supporters peeked out of their car windows. Those who were standing outside their cars ensured that they were maintaining social distancing as they clapped. There were no cheers at all. Same was the case with shouting slogans.

Unlike the Trump rallies, which are publicised locally much in advance and people are encouraged to participate, the car drive-in rallies of Biden and Harris are by invitation only.

The invitees are asked to drive in at the rally venue well in advance. Volunteers of the Biden campaign check the names, do a temperature check of all those inside the car.

A maximum of three people is allowed inside the car, whose names are required to be informed to the campaign much in advance.

Before the cars are driven into the venue, all of them go through a security check which takes time, at least a few minutes per car.

Biden and Harris's supporters patiently go through the process to listen to their leaders. Unlike in the past, or practice of their predecessors like Barack Obama and Hillary Clinton, neither Biden nor Harris interacts with the crowd. Gone are the days of shaking hands across the rope, giving autographs or taking selfies.

Some of the enterprising supporters on Sunday took selfies while Harris was speaking. Over the past few days, she has been delivering identical speeches at all her rallies. On Sunday, she was in Georgia and North Carolina including in this city.

At the Fayetteville drive-in rally, she asked her supporters to go out and vote if they have not voted yet.