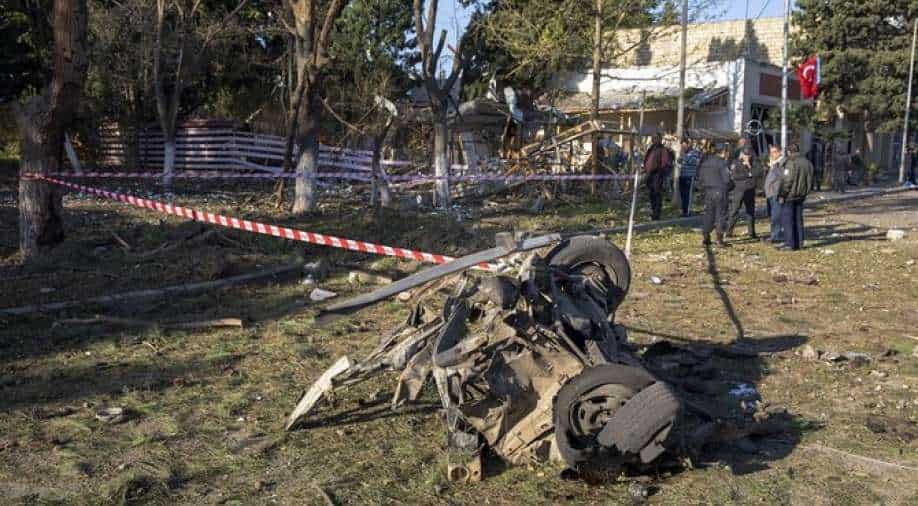 The aftermath of the conflict between Armenia and Azerbaijan Photograph:( AFP )

The attack and subsequent accusation came even as United States Secretary of State Mike Pompeo urged the leaders of Azerbaijan and Armenia to abide by a US-brokered ceasefire that appeared to fail.

Azerbaijan on Tuesday accused Armenia of carrying out a missile attack on its town of Barda near the frontline with Nagorno-Karabakh that killed four people.

Azerbaijani presidential aide Hikmet Hajiyev said on Twitter that a toddler was among the dead and that 10 people were wounded, accusing Armenia of an "indiscriminate and targetted attack against civilians".

The attack and subsequent accusation came even as United States Secretary of State Mike Pompeo urged the leaders of Azerbaijan and Armenia to abide by a US-brokered ceasefire that appeared to fail.

In separate phone calls with Armenian Prime Minister Nikol Pashinyan and Azerbaijani President Ilham Aliyev, Pompeo "pressed the leaders to abide by their commitments to cease hostilities and pursue a diplomatic solution to the Nagorno-Karabakh conflict," the US State Department said.

Pompeo's deputy, Stephen Biegun, met separately in Washington over the weekend with the two nations' foreign ministers who agreed to a third ceasefire to halt a month of fighting that has left hundreds dead.

But less than an hour after the humanitarian truce was due to begin at 8:00 am (0400 GMT) on Monday, the two countries accused each other of violations.

The former Soviet republics have been locked in a bitter conflict since the 1990s after Armenian separatists backed by Yerevan seized control over the mountainous province of Nagorno-Karabakh.

Azerbaijan, an ally of Turkey, has been trying since to recapture Nagorno-Karabakh, a breakaway region populated and ruled by ethnic Armenians. The worst fighting in decades in the area has killed hundreds of people and risks sucking Turkey and Russia into a regional conflict.

Armenia acknowledged on Tuesday that Nagorno-Karabakh forces had withdrawn from a strategic town between the enclave and the Iranian border.

Armenian defence ministry official Artsrun Hovhannisyan said in a news conference late on Monday that ethnic Armenian forces had given up the settlement of Gubadli south of the enclave "to avoid unnecessary losses", but the situation was "not critical".

Localised battles were taking place along several parts of the front line on Tuesday morning, the Nagorno-Karabakh defence ministry said in a statement.

Azerbaijan's defence ministry said in a statement that its military positions and settlements near the front line had been fired upon and that combat continued mainly in the Khojavend, Fizuli and Gubadli regions.

The OSCE Minsk Group, formed to mediate the conflict and led by France, Russia and the United States, is scheduled to meet the Armenian and Azeri foreign ministers in Geneva on October 29. Turkey has demanded a bigger role in the mediating body.