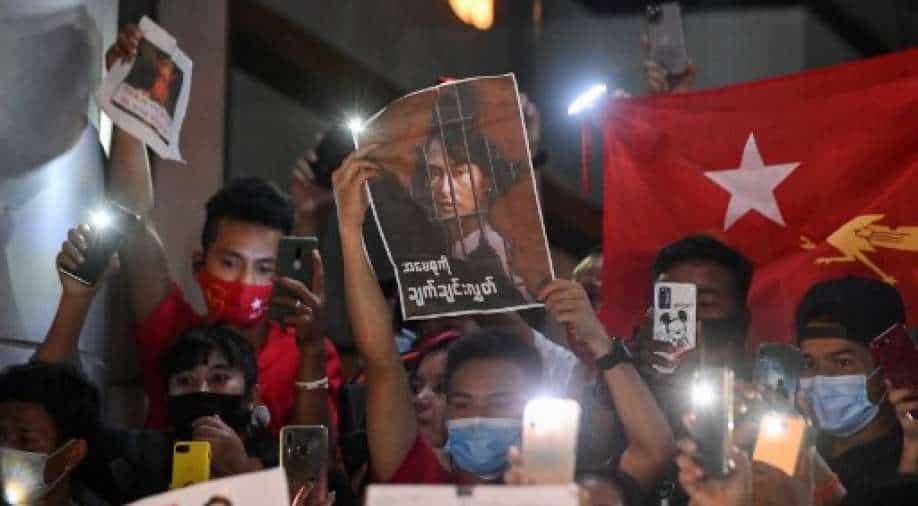 A protester holds an image of the detained Myanmar civilian leader Aung San Suu Kyi during a demonstration in Bangkok Photograph:( AFP )

China had earlier called for all parties in Myanmar to "resolve their differences" even as the US and European nations condemned the coup.

The United Nations Security Council(UNSC) called for the release of all detainees even as the military government in Myanmar arrested a key aide of Aung San Suu Kyi on Friday.

UNSC, however, stopped short of condemning the coup after China and Russia's intervention who are the permanent member of the UNSC apart from Britain, France and the United States.

China had earlier called for all parties in Myanmar to "resolve their differences" even as the US and European nations condemned the coup. US President Joe Biden in a stern message to the military asked the regime to "relinquish power" while demanding freeing of prisoners.

"There can be no doubt: in a democracy, force should never seek to overrule the will of the people or attempt to erase the outcome of a credible election," President Biden said, adding,"The Burmese military should relinquish power they have seized, release the advocates and activists and officials they have detained, lift the restrictions in telecommunications, and refrain from violence."

UN Secretary-General Antonio Guterres had earlier said he would do  "do everything we can to mobilise all the key actors and international community to put enough pressure on Myanmar to make sure that this coup fails."

Meanwhile, Aung San Suu Kyi's National League for Democracy (NLD) said that party stalwart Win Htein,79, was arrested as the crackdown on the party continued in the aftermath of the coup in Myanmar.

It is still unknown where Suu Kyi is detained who has not been seen in public since Monday when the military moved in to oust the democratic leadership and detained  Myanmar president Win Myint.

The military had blocked internet services in the country on Thursday and restricted access to Facebook which is used by a majority of Myanmar population even as there were some reports of residents and NLD supporters hitting out against the military in Yangon.