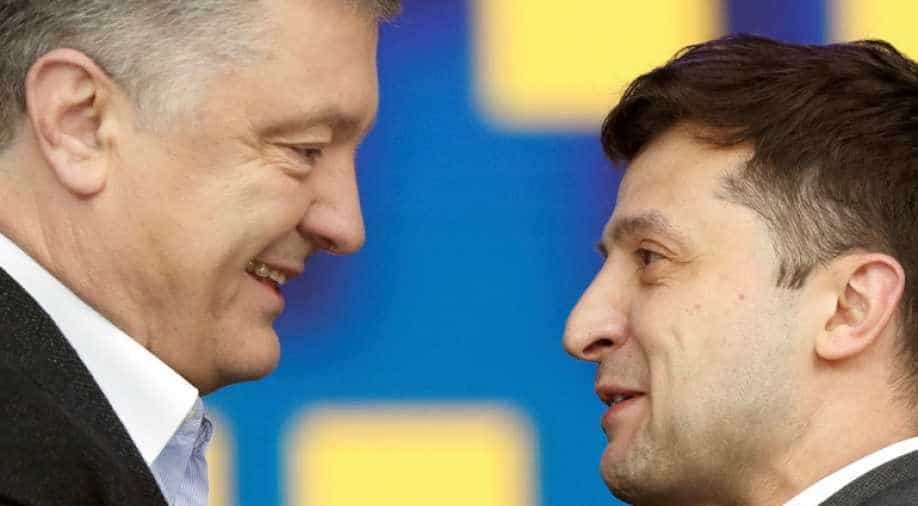 Two men in a hulking football stadium had a raucous debate on Ukraine's next president it was one of the last opportunities for incumbent President Petro Poroshenko to try to overhaul a significant lead over his challenger Volodymyr Zelenskiy, a comic.

The two men vying to be Ukraine's next president traded insults in a raucous debate on Friday in front of thousands of supporters before an election that could put a comedian with no political experience in charge of a country at war.

The debate, held in a hulking football stadium, was one of the last opportunities for incumbent President Petro Poroshenko to try to overhaul a significant lead in the opinion polls enjoyed by his challenger Volodymyr Zelenskiy, a comic.

The event was light on policy and heavy on theatrics with supporters cheering and booing their respective candidates and shouting "Shame" and "Go away" in a gladiatorial atmosphere.

At stake in Sunday's election is the leadership of a country on the frontline of the West's standoff with Moscow following 2014 protests that caused Poroshenko's Kremlin-backed predecessor to flee into exile, and foreshadowed Moscow's annexation of Crimea.

In a rare break from mutual mud-slinging, both men briefly knelt on stage at one point to honour the memory of Ukrainian soldiers killed in the country's simmering 5-year war with Russian-backed separatists.

Zelenskiy, 41, who plays a fictional president in a popular TV series, tried to cast Poroshenko, 53, as a rich out-of-touch leader who has overseen corruption and failed to end the war.

"I'm not a politician," Zelenskiy told Poroshenko. "I'm just an ordinary person who has come to break the system. I'm the result of your mistakes and promises."

He also questioned why living standards were in decline.

"How is it that Ukraine is the poorest country with the richest president?"

Standing in front of a Ukrainian flag surrounded by army veterans, Poroshenko tried to portray Zelenskiy as an inept draft-dodger who would be unable to defend the country against Russian President Vladimir Putin.

"You'd be a weak head of state who would be unable to defend yourself from Putin's blows. I don't believe that Mr Volodymyr (Zelenskiy) dreams of handing over Ukraine, of dragging Ukraine back into the Russian empire, but Putin has such a dream."

Zelenskiy was a front for other people, said Poroshenko, accusing him of wanting to further Russian interests and those of Ihor Kolomoisky, one of Ukraine's richest businessmen.

He also levelled accusations of financial wrongdoing against Zelenskiy to which the comedian hit back:

"I'm not at the prosecutor's office, I haven't done anything to find myself there, but maybe you'll have to meet with the prosecutor."

Zelenskiy has put Poroshenko on the backfoot by running an unorthodox campaign that eschewed traditional rallies and relied on quirky social media videos and comedy gigs.

The hour-long debate in the stadium, an unprecedented spectacle in Ukraine's modern history, came after Zelenskiy challenged Poroshenko to meet him there.

"I think this is the first and last time it'll be this way in the history of such debates. For them to be in a stadium? Never again. The atmosphere is just super," said Anya, a 25-year-old Zelenskiy supporter from the Poltava region.