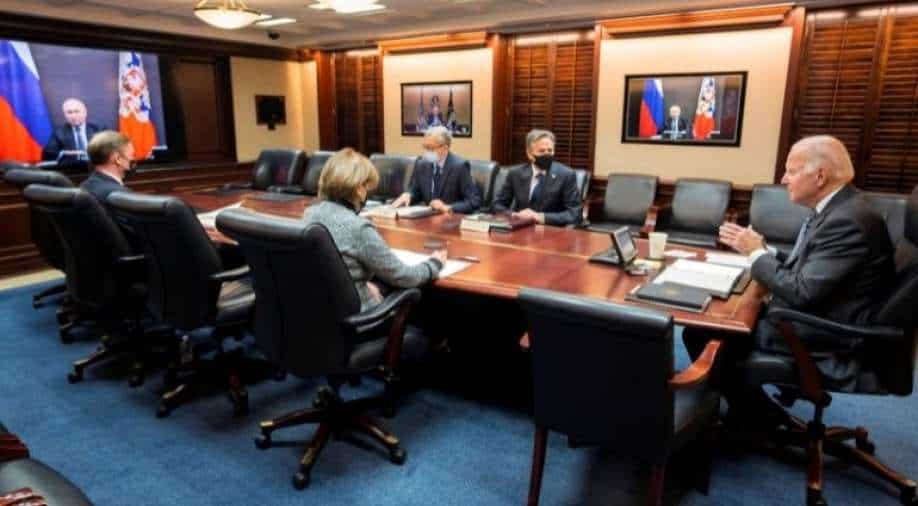 Ushakov said Putin bluntly told Biden that Russia is worried about the military activity buildup by Ukraine and NATO. He said Putin touched upon the recent NATO drills in the Black Sea.

Russian President Vladimir Putin briefed his US counterpart Joe Biden during the video talks about Ukraine's failure to comply with the Minsk agreements, according to Kremlin aide Yury Ushakov.

"Our president informed [Biden] in sufficient detail about how Kiev fails to fulfill the relevant Minsk agreements. It was said directly that Ukraine sabotages the Minsk implementation, in addition, it sabotages the agreements reached within the framework of the Normandy Four summit, delays the negotiation process in the contact group, seeks to exclude Donbas from the negotiation process," Ushakov said following the leaders' talks.

Ushakov said that, in his meeting with Putin, Biden emphasised that the US and NATO are concerned about Russian force movements near Ukraine's borders.

According to Russian state-controlled RT News, the Kremlin said in a readout that Moscow is "seriously interested" in obtaining "reliable and firm legal guarantees" excluding NATO’s further expansion eastward and the deployment of "offensive strike weapons systems in countries adjacent to Russia."

According to Ushakov, the two leaders spent a lot of time discussing Ukraine during their meetings.

According to him, Biden informed Putin that the US is preparing large-scale penalties in the event that the situation in Ukraine worsens.

According to Ushakov, Putin told Biden directly that Russia is concerned about Ukraine's and NATO's military buildup.

Putin, he added, mentioned the recent NATO drills in the Black Sea.

According to a Russian presidential aide, Putin informed US President that the "red lines" for Moscow are NATO's continued eastward expansion and the deployment of offensive weapons in Ukraine.

The subject of whether Putin committed not to deploy troops to Ukraine in a talk with Biden, according to Ushakov, is strange and was not even considered.

He claimed that Biden informed Putin in an acceptable manner about the possibility of further sanctions against Ukraine.

"Biden discussed the possibility of sanctions.What was previously spoken publicly and relayed to us through various routes has now been said, but in a more acceptable and presidential-worthy form", Ushakov explained.

What are the Minsk agreements on the Ukraine conflict?

The Minsk Protocol was an agreement aimed at ending the conflict in Ukraine's Donbas area.

It was drafted by the Trilateral Contact Group on Ukraine, which included Ukraine, Russia, and the Organization for Security and Co-operation in Europe (OSCE), with the leaders of France and Germany serving as mediators in the so-called Normandy Format.

Here are the 13 points of Minsk agreements, in brief:

1. An immediate and comprehensive ceasefire

2. Withdrawal of all heavy weapons by both sides

3. Monitoring and verification by the OSCE

4. To start a dialogue on interim self-government for the Donetsk and Luhansk regions, in accordance with Ukrainian law, and acknowledge their special status by a resolution of parliament.

5. A pardon and amnesty for people involved in the fighting

6. An exchange of hostages and prisoners.

8. Resumption of socio-economic ties, including pensions.

9. Restore full control of the state border by the government of Ukraine.

10. Withdrawal of all foreign armed formations, military equipment and mercenaries.

11. Constitutional reform in Ukraine including decentralisation, with specific mention of Donetsk and Luhansk.

12. Elections in Donetsk and Luhansk on terms to be agreed with their representatives.

13. Intensify the work of a Trilateral Contact Group including representatives of Russia, Ukraine and the OSCE.